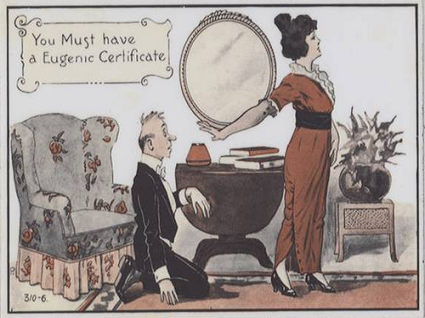 In total, 7,325 plus individuals, 62% of which were female,  were sterilized in Virginia.  Of those forcibly sterilized, about half were deemed “mentally ill” and the other half were “mentally defective.”

Carrie Buck, age 17 of Charlottesville, was placed at the Virginia Colony by her foster parents shortly after she gave birth to an illegitimate child.  Since her mother  Emma Buck  had previously been committed to the asylum, officials determined that Carrie and her mother shared hereditary traits of feeblemindedness and sexual promiscuity.

To understand the treatment of Carrie you must understand  beliefs popular during the early 20th Century based on the science of Eugenics — improving the human race by control of breeding.  The Eugenics movement grew from the core idea of evolution, primarily those espoused by Charles Darwin.  Eugenics spanned the political spectrum from conservatives to radical socialists of the day who believed that the survival of the human race should be under the control of those who were wealthy, more intelligent and responsible.  They believed that “superior humans” must direct their own evolution by preventing the breeding and  interbreeding with “inferior stock,” i.e. the poor,  Jews, defectives, blacks, etc.   Applying Darwinian analysis to racial groups led Eugenics to believe that some races were more evolutionarily advanced than others and the presence of certain racial groups in the U.S. and Europe constituted  a threat to the long term biological quality of the nation.  These beliefs were publicly held until after WWII when they went underground.

The Virginia Colony located in Lynchburg, Virginia, was opened in 1910 as the largest asylum in the U.S.   Originally intended to be a home for epileptics, the mentally retarded and the severely disabled, Superintendent Albert Priddy lobbied the Virginia General Assembly for funds to expand the facility to include those  deemed “feebleminded,” which along with the Eugenics beliefs of the day made these people  unacceptable for proliferation.   Soon, the Virginia Colony facility became a home for the poor, the uneducated, Mongrels, the anti-social, prostitutes, other white Virginians living on public or private charity, etc.  regarded as unfit by the state.

With the passage of the 1924 Virginia sterilization law, Priddy wanted a test case to determine the strength of  the new law.  He selected Carrie Buck.

The right of the state to perform the sterilization procedure was challenged and heard in the Circuit Court of Amherst County.  Buck’s attorney, Irving P. Whitehead, who was on the board of the Virginia Colony,  provided a predetermined non-defense of Buck.   Audrey E. Strode, the man who drafted Virginia’s sterilization law, presented more than a dozen witnesses, including those “experts” in the field of Eugenics to prove Carrie’s “feeblemindedness,” and Whitehead managed not to find one single person who would argue against these expert witnesses.   As it was predetermined, the court ruled in favor of Virginia’s new law.  The case was appealed to the Virginia Supreme Court which affirmed the lower court’s decision in 1925.  The U.S. Supreme Court heard the case in 1927 and upheld the law by a vote of 8 to 1.  Chief Justice Holmes issued a statement that “Three generations of imbeciles are enough.”  Justice Homes was referring to Carrie’s child Vivian who had also been prejudged as an infant to be feebleminded to bolster eugenist’s theory of it being an inherited trait.

With the Supreme Court’s decision to uphold sterilization law, the American eugenics movement gained legitimacy.  Sterilization was used throughout the U.S. until  rates began to decline in the mid 1950’s.  Both, in 1956 and again in 1962, bills were proposed in Virginia  that allowed for compulsory sterilization of women with multiple illegitimate children but both failed.  The Virginia Advisory Legislative Council recommended in 1961 that no changes should be made to the Eugenical Sterilization Act because there had been “no substantial complaint.”   At this time every other state, except North Carolina,  had found reason to stop or at least slow rates of sterilization.

In 1962 Virginia enacted  additional voluntary sterilization legislation which allowed women to volunteer to be sterilized as a birth control measure.  Virginia’s current law enacted in 1980 allows for sterilization for those with a need for contraception who have no other options in obtaining it.  Patients can be still be sterilized involuntarily, but the process that one must go through before gaining permission to involuntarily sterilize a patient is very protective.

In Virginia, at least,  there seemed to be little difference between the harm to society caused by minorities and the harm caused by undesirable whites.  During the period of sterilizations, only 22% of those sterilized were African America.  But, racist eugenics came into play after Brown v Broad of Education in 1954 and again reared its ugly head with the 1962 and 1964 proposed laws for punitive sterilization of welfare mothers with illegitimate children that also failed to pass.

It must also be noted that the University of Virginia pushed the thought and science of eugenics through research and education.  Dr. H.E. Jordan, Dean of the Department of Medicine said that “eugenics. . .will work the greatest social revolution the world has yet known. . .it aims as the production and the exclusive prevalence of the highest type of physical, intellectual and moral men within the limits of human protoplasm”.   Having a similar influence, the Virginia Medical Monthly published medical reports from superintendents of various Virginia institutions as a method to increase the loathing toward those deemed feebleminded while also spreading eugenics theory and practice.

In 2002 a marker was erected by the Virginia Department of Historic Resources,  to commemorate those sterilized under the Virginia law.  It reads in part — “In 1924, Virginia, like a majority of states then, enacted eugenic sterilization laws.  Virginia’s law allowed state institutions to operate on individuals to prevent the conception of what were believed to be “genetically inferior” children. . .Later evidence eventually showed that Buck and many others had no ‘hereditary defects.’

This is in no way an indictment of Virginia.  Sterilization laws were prevalent throughout the United States, enacted through progressive’s eugenics ideology.  Today, that ideology still permeate our ruling class, although it is no longer expressed as a eugenics movement.  Today eugenics it is expressed through sustainable living, population control and abortion.   It was wrong then and it is wrong today!