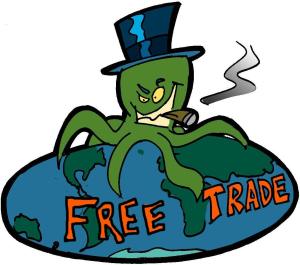 Obama is once again strutting his stuff as he is prepares for a parting massive attack on the U.S. Constitution, on the constitutional powers of Congress, on US sovereignty and on all 50 states.

The Trans Pacific Partnership (TPP) and the Transatlantic Trade and Investment Partnership (TTIP) enshrine the rights of Corporations under International Law, and restricts future governments from overturning the changes through fear of costly legal action. They are the largest trade agreements in history, and yet are not open for review, debate or amendment by national parliaments or the public

These treaties, wrapped in a Nixon era procedure known as Fast Track, another “you have to pass it to see what’s in it” tactic, authorizes the president to make foreign deals in secret and then demand that Congress take a “quick” vote approving many thousands of pages without debate, amendment, and more than likely, without knowing what’s in the actual treaty.

Most people don’t realize that trade agreements like NAFTA, the TPP and TTIP contain rules and regulations covering global warming, sustainable development, homeland security, international courts, etc., rules and regulations  that have noting to do with trade, but  will ultimately line the pockets of foreign governments and increase the wealth of the world’s elite.   They are the means with which our government transfers America’s wealth and erodes America’s sovereignty.

Less than one fifth of  Obama’s Trans Pacific Partnership deals with trade. Much of it is about “investors” rights meaning governments that enter into the treaty can’t do anything to limit the profits of corporations, meaning that no nation can pass a law if it will interfere with the “rights” of giant corporations.These trade agreements are negotiated by giant multinational corporations along with government officials who understand they will get lucrative jobs with those corporations. These so-called free trade agreements  benefit only the 1% and the billionaires behind these corporations. They have not helped our economy and have not increased jobs. In fact they have led to massive trade deficits that are draining our economy, massive job loss and wage loss, and job fear for those still working

Past experience conclusively proves that free-trade treaties create jobs in foreign countries, not in the U.S.   Bill Clinton faithfully promised that the North American Free Trade Agreement (NAFTA) would produce more exports and more jobs for the U.S.  But it didn’t happen – we now have an annual sixty to seventy billion trade deficit with Mexico.  Similar lies about free trade with China  resulted in a 2013 trade deficit of $316 billion, and our goods deficit with South Korea has risen to over $18 billion.

In 2015 alone the US amassed a record $367 billion goods trade deficit with China.  China and its state owned companies are exporting massive amounts of paper, steel, aluminum and other goods to our markets at any cost to avoid the pains that come from a slowing economy.  The consequences of selling at a loss are absorbed by the Chinese government in order to maintain production, employment, and, in turn, social stability.  At home, where market forces have real impact, China’s aggressive actions have depressed prices, forced plants to close and left 15,000 steel workers with layoff notices.

This trend is repeated throughout America in a number of vital industrial sectors.  Virginia alone has lost nearly 130,000 manufacturing jobs since 2001 when China was granted permanent duty reductions to the US market and entry into the World Trade Organization.  As a nation we are increasingly becoming reliant on countries like China and Russia, nations traditionally our enemies,  for everything from steel to construct aircraft carriers to the rare earth elements used in night-vision goggles to the communications systems used on the front lines of combat.

These treaties are our worst nightmare. They will affect everything from GMOs and labeling/bans, food safety, environmental issues, public health, jobs, banking and finance, energy, the internet and much more and will give nearly unlimited power to the big international corporations.  America is fast becoming reliant on our enemies for everything from steel to construct aircraft carriers to the rare earth elements used in night-vision goggles to the communications systems used on the front lines of combat.

Free trade treaties create jobs, investment and prosperity for foreign nations, and Americans investing abroad while diminishing the incomes of Americans at home.

Thomas Jefferson recognized the important role that trade can play to benefit our nation’s economy.  “Commerce with other nations is not only necessary and beneficial to all parties, it is a right and a duty….In order to function properly, however, free trade must be established on a reciprocal basis.”