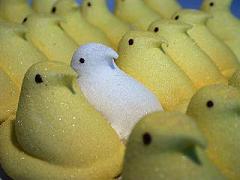 According to the psychiatrist’s bible – the  Diagnostic and Statistical Manual of Mental Disorders (DSM), nonconformity, arrogance, narcissism, above average creativity, cynicism and antisocial behavior are no longer quirks – they are officially a mental illness.

The DSM has turned everyday life into a mental illness:  Your kids throw temper tantrums?  They are suffering from Disruptive Mood Dysregulation Disorder.  Ever have a senior moment?  You’re suffering from a “mild neurocognitive disorder.”  Do you have excessive thoughts or feelings about pain or discomfort.  Guess what – you’re crazy – you suffer from “somatic symptom disorder” even if all that pain and discomfort involves cancer or some other debilitating disease.   Over stuff your face at least once a week?  You’re officially a binge eater.   And I am pretty sure they have a pill for that.

One mental illness that caught my eye is Oppositional Defiant Disorder (ODD) something that once meant being a teenager.   The DSM defines this mental illness as an “ongoing pattern of disobedience, hostile, defiant behavior that includes questioning of authority,  negativity,  argumentativeness,  blaming others for your mistakes, frequent outburst of anger, being spiteful, swearing and being easily annoyed.”  Sounds like a teenager to me.  While their diagnosis guidelines are for children, they will not let adults off the hook either.  So if you don’t like government, or lying, or politicians, wait a minute, I’m being redundant, or question stupid laws, or hate seeing your country shoved down the road to full-blown Marxism – you are officially now mentally ill also.

Who sets the standards for what is normal? Apparently the American Psychiatric Association has been anointed by God to make this determination.   Personally I don’t trust them, at least not since they decided that men and women who molest children are not mentally ill.  According to the DSM, there must be other problems because no one would believe that   pedophilia, the desire to molest innocent children, is a mental illness, in and of itself.

Doctors are using the DSM to diagnose attention deficit hyperactivity disorder (ADHD),  so they can dope up our children for being normal children.   Virtually every child  shows  “symptoms of ADHD,” especially during the terrible twos, the “NO” threes and “I don’t want to” fours.  There is no such thing as an average child at any age.  Kids develop at different rates.  Some just take a little longer to focus their attention and restrain their impulses. And in the case of males, sometimes it takes 20 or 30 years.  Yet what we once referred to as normal is now being diagnosed as a mental disease that will follow them all their lives, so that doctors can drug them into zombie land because no one has the patience or wants to take the time to deal with them.  No one seems to care that children and adolescents are at high risk of suicide when using antidepressants and other psychiatric drugs.

During the 1960s and 1970s  the Communist Party in the Soviet Union  took their intolerance for nonconformity to the party line as a new mental illness. It was a frightening episode in Soviet history in which perfectly healthy citizens could be deemed psychotic simply on account of their political views.  What better way to discredit and detain activists and dissents  than to diagnose them as mentally unstable?   Anyone who failed to follow party line was isolated, forcibly medicated and received repressive therapy.   It also served as a powerful message to the  masses that they needed to adhere to the party line  – that any deviant thinking was surely a sign of mental instability.   As Nikita Khrushchev noted in 1959, it should be impossible for people in a communist society to have an anti-communist consciousness, and “Of those who might start calling for opposition to Communism on this basis, we can say that clearly their mental state is not normal.”

Am I suggesting that our government is using the American Psychiatric Association to control the population?   No, Absolutely, Maybe.  Considering everything that is going on in our nation today – the lies, the propaganda, the quagmire that we once called government,  the left-wing agenda to destroy America’s freedom –  I certainly wouldn’t put it past them.  But what do I know?

When Gary Greenberg, a psychotherapists and author of The Book of Woe wrote that the “pharmaceutical industry influence in psychiatry has contributed to  turning normal conditions into diseases so that drugs can be prescribed to treat them,” the panel that writes the DSM totally dismissed his claims as nonsense because, as they so aptly reminded everyone, they had agreed in advance not to “collect more than $10,000” from the pharmaceutical companies in the calendar year preceding publication of a new manual.

They’re starting to sound like politicians.  We don’t take bribes – it doesn’t matter how many millions we took previously or will take once the book is published.  Ignore that man behind the curtain!  The ugly truth is that as more and more individuals are diagnosed with psychiatric illnesses, the more money pharmaceutical companies make in profits, profits they gladly  use to grease the palms of the American Psychiatric Association and its members.

For over three decades, the pharmaceutical industry has been successful at convincing us that illnesses such as depression and anxiety–not to mention normal human emotions such as sadness, shyness, and stress–can be alleviated with a pill.  Unfortunately, the psychiatric field has allowed itself to be co-opted by the industry and failed to fully question the scientific merits of those psychoactive drugs in which they prescribe.  While there is certainly a place for pharmaceuticals in the treatment of mental illness, drugs are not always the answer and certainly they are not a panacea for all that ails us.

According to recent research, one in every six Americans are now on antidepressants or some type of psychiatric drug and most appear to be taking them long term.  That is a significant increase, almost double, from 2011, according to Thomas J. Moore, a researcher at the Institute for Safe Medication Practices.  According to the statistics in the study, in 2013 nearly 17% of adults used one or more psychiatric drugs, up 10% from 2011.  Twelve (12) percent of users are taking antidepressants; 8.3% are taking anxiety drugs, sedatives and/or sleeping pills; 1.6% are taking antipsychotics; and 25% of seniors between age ages of 60 and 85 are taking at least one psychiatric drug, despite the fact that incidence of diagnosable mental problems tend to be lower in seniors than younger adults overall.

Many of these drugs pushed by the APA and big drug companies have serious side effects, including worsening depression, anxiety and violent ideation that can lead to murder and suicide.  Suicide rates are at a 30 year high, prescription drug abuse and overdose deaths have become a public health emergency and mental disorders are now the second most common cause of disability.  All in the name of the almighty dollar!

“Here’s to the crazy ones. The misfits. The rebels. The troublemakers. The round pegs in the square holes.  The ones who see things differently. They’re not fond of rules. And they have no respect for the status quo. You can quote them, disagree with them, glorify or vilify them. About the only thing you can’t do is ignore them. Because they change things. They push the human race forward. And while some may see them as the crazy ones, we see genius.  Because the people who are crazy enough to think they can change the world, are the ones who do.”   Apple, Inc.

← A Pagan-Islamic Curse On America
A Murray Christmas for Obamacare? →