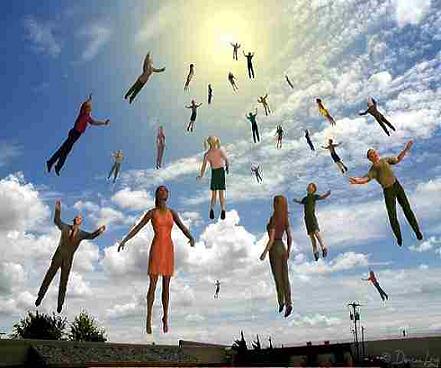 From the beginning of the Christian era until the Protestant Reformation, only one person, Ephraem of Nisibis, in 373 A.D. preached, in one known sermon, that “for all the saints and Elect of God are gathered, prior to the tribulation that is to come, and are taken to the Lord lest they see the confusion that is to overwhelm the world because of our sins.”   The rapture doctrine was not heard of again until the rise of Dispensationalism.

Margaret MacDonald was born in 1815 in Port Glasgow, Scotland. In early 1826 a few preachers in the area  were stressing that the world’s problems could only be solved through an outbreak of supernatural gifts from the Holy Spirit.    It was at this time that two sisters, Isabella and Mary Campbell of the parish of Rosneath manifested charismatic experiences such as speaking in tongues.  Others in the church also began to speak in mysterious tongues.  Modern “Pentecostalism” had its birth.

By 1830 miraculous revelations were being reported by James Campbell as coming from his sister, Margaret MacDonald, who both thought was on the verge of dying  from an illness.  Sometime during the period of February through March, 1930, Margaret claimed, while seriously ill, she came under the power of the Holy Spirit and experienced manifestations of mingled prophecy and vision.  The message that she received convinced her that Christ was going to appear in two stages at His Second Advent and not a single occasion as most people believed.  The Holy Spirit emanation revealed Christ would first come in glory to those who look for Him and again later in a final stage when every eye would see Him.

Word began to spread throughout Scotland and England of the charismatic experiences in  Port Glasgow and the Brethren Church sent John Nelson Darby and Benjamin Wills Newton to investigate.

“It was first the awful state of the land that was pressed upon me.  I saw the blindness and infatuation of the people to be very great.  I felt the cry of Liberty just to be the hiss of the serpent, to drown them in perdition.  It was just ‘no God.’ I repeated the words: Now there is distress of nations, with perplexity, the seas and the waves roaring, men’s hearts failing them for fear.  Now look out for the sign of the Son of Man.  Here I was made to stop and cry out, O it is not known what the sign of the Son of Man is; the people of God think they are waiting, but they know not what it is. . .’Tis Christ in us that will lift us up – he is the light -’tis only those that are alive in him that will be caught up to meet him in the air. . .I said, Now shall the people of God have to do with realities, now shall the glorious mystery of God in our nature be known – now shall it be known what it is for man to be glorified.  I felt that the revelation of Jesus Christ had yet to be opened up, it is not knowledge about God that it contains, but it is an entering into God.  I saw that there was a glorious breaking in of God to be.  I felt as Elijah surrounded with chariots of fire. . .I saw the people of God in an awfully dangerous situation, surrounded by nets and entanglements, about to be tried, and many about to be deceived and fall. . .I frequently said that night, and often since, now shall the awful sight of a false Christ to be seen on this earth. . .”

John Nelson Darby was born in London in 1801 and educated at Westminster School and Trinity College, in Dublin, Ireland.  Although  an attorney, he was ordained as an Anglican Clergyman in Ireland.  In 1825 he became deacon of the established Church of Ireland but later resigned in protest when the Archbishop of Dublin ruled that converts were obligated to swear allegiance to King George IV as the rightful king of Ireland.  He and a few of his friends began informal meeting to discuss their  bible doctrines and from these meetings a new church was formed, the Plymouth Brethren.   The movement spread throughout Europe and England in the years that followed.  Many people think that the originator of the “secret rapture” doctrine came from John Darby but the truth is, he received the doctrine from the purported visions of Margaret MacDonald.

While some claim that Darby and Newton found the charismatic experiences they investigated  demonic, Darby began teaching the new doctrine of the “secret rapture” as early as 1830.  Another sect, the Catholic Apostolic Church headed by Edward Irving also took up the doctrine believing that the Second Coming was imminent because of the outbreak of prophecies and speaking in tongues.

Ernest R. Sandeen, in the “The Roots of Fundamentalism” wrote that Darby introduced the idea of a secret rapture of the Church and a gap in prophetic fulfillment between the 69th and 70th week of Daniel.  These beliefs became basic to the system of theology known as dispensationalism.

Beginning in 1862, Darby lived in and traveled throughout the U.S. and Canada spreading the Brethren message.  When he failed to convert other churches to the Brethren doctrines, he began just preaching his “secret rapture” theory which was made  more popular by Cyrus Scofield’s  “The Scofield’s Reference Bible.”

The 19th century was  the  “gilded age” when Americans believed that the US was on the verge of creating a scientific and technological paradise on earth.   Mark Twain  coined the phrase “gilded age” meaning that the period was glittering on the surface but corrupt underneath.  In the popular view, the late 19th century was a period of greed and guile, scandal ridden politics and vulgar display, which witnessed the birth of modern America and the beginnings of the progressive era.

While it is possible that revelations can come from God it is always prudent to be cautious.  Near the same time that Margaret MacDonald was receiving her visions, in America Joseph Smith was also experiencing his apparitions that brought Mormon doctrines to the world; John Wilson had his dreams that were the spark that started the teaching of British-Israelism; and not long afterward, Ellen G. White received her visions that resulted in many Seventh Day Adventist teachings.  While all four claimed revelation from God, all the doctrines were at variance with one another and contrary to Biblical teachings.

The rapture doctrine is popular in the U.S.  although  not nearly so emphasized in other parts of the world.  David B. Currie in “Rapture: The End-Times Error That Leaves the Bible Behind” summarizes the psychological danger of rapture theology.  “. . .the belief system of rapturists allows them to take a certain comfort in the face of evil.  For when things really deteriorate into chaos, they expect to be safely tucked away in Heaven. . .”

In  truth, the word Rapture is not found in the  original manuscripts or the King James Bible translation.

The basic tenets of the “secret rapture” doctrine are simple –  Christ will come back to this earth in two phases.  He will first return secretly to rapture the Church away from this world so that they might escape the Great Tribulation.  Christ then returns in a visible advent to dispense His wrath on the world’s nations.

Rather than accept man’s word on the rapture, I prefer God’s word.

When the  disciples came to Christ at the Mount of Olives to ask what would be the signs of His return (Matt 24:3) Christ gave them every sign that culminated in His return.  The entire Chapter of Matthew 24 deals with the issue.   In verse 15 Christ says “When ye therefore shall see the Abomination of Desolation (manuscript says Desolator – denoting a person) spoken of by Daniel the prophet stand in the holy place. . .”   Christ was referring to Daniel 9:26-27 which reads  “. . .shall Messiah be cut off, but not for himself; and the people of the prince that shall come shall destroy the city and the sanctuary. . .And he shall confirm the covenant with many for one week; and in the midst of the week he shall cause the sacrifice and the oblation to cease. . .”  Daniel speaks of a person not a condition.  The He that Daniel referenced was the Antichrist who comes pretending to be the Christ.  In the Greek language anti means instead of.

In Matthew Chapter 24: 29-30 Christ says “Immediately after the tribution of those days. . .And then shall appear the sign of the Son of man in heaven: and then shall all the tribes of the earth mourn, and they shall see the Son of man coming in the clouds of heaven with power and great glory.”

Revelation 13:7-8   “And it was given unto him (Antichrist) to make war with the saints and to overcome them: and power was given him over all kindred and tongues and nations. And all that dwell upon the earth shall worship him, whose names are not written in the book of life of the Lamb slain from the foundation of the world.”   Saint as used in verse 7 is the Greek word “hagios”  meaning sacred, religious, consecrated.   It designates that the Church will  be on this earth during the time the  Antichrist is here.

References Used:  The Rapture Cult by Robert L. Pierce; The Incredible Cover-up by Dave MacPherson; Teachers of the Faith and the Future by B.W. Newton and Dr. S.P.Tregelles, 2nd edition

“Apart from the test of the Word, which is the only final one, there are certain reasons why this doctrine should be viewed with suspicion.  It appears to be little more than sixty years old; and it seems highly improbable that if scriptural it could have escaped the scrutiny of the many devoted Bible students whose writings have been preserved to us from the past.  More especially in the writings of the early Christian fathers would we expect to find some notice of this doctrine, if it had been taught by the Apostles; but those who have their works declare that they betray no knowledge of a theory that the Church would escape the Tribulation under Antichrist, or that there would be any “coming” except that spoken of in Matthew 24, as occurring in manifest glory “after the Tribulation.”  This is all the more significant because these writers bestowed much attention upon the subject of the Antichrist and the Great Tribulation.  Augustine, referring to Daniel 7, wrote: “But he who reads this passage even half asleep cannot fail to see that the kingdom of Antichrist shall fiercely, though for a short time, assail the Church.”  Edmund Shackleton, “Will the Church Escape the Great Tribulation?” cited by Alexander Reese in “The Approaching Advent of Christ.”

5 comments for “Rapture of the Church: Is It A Hoax?”