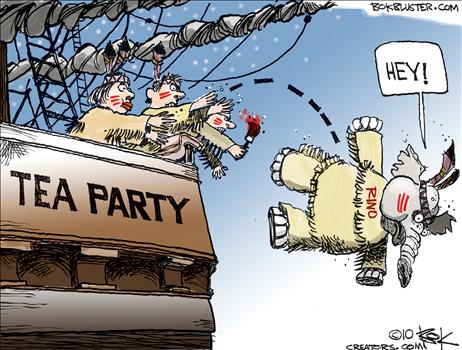 What are voters looking for in a Republican presidential candidate?  How about someone who believes that the constitution means what it says and says what it means.  How about  someone who has principles and integrity,  and who is willing to stand on his or her beliefs and not compromise them away at the drop of a hat.   I don’t think that is too much to ask.

Mitt Romney, the father of Romeycare, must suffer from whip lash as often as he changes his ‘core beliefs’.  Will he be able to gain significant support to take the nomination?  I sincerely hope not.  While I don’t think he is a socialist,  I know he definitely is not a conservative.

Newt Gingrich started off his campaign by putting both feet in his mouth when he attacked Paul Ryan’s plan to reform Medicare as  “right wing social engineering” even though he had praised it several months earlier.   Obviously his core political beliefs shift as fast as Romney.  Newt has also been involved in pushing the climate change scam in a video with Nancy Pelosi and is in favor of the federal government’s corporate welfare scheme of subsidizing ethanol production.    Teaming up with Al Sharpton he toured the country to raise awareness of the “race gap” which might be admirable except for the fact that Sharpton, who plays the race card as often as Representative James Clyburn,  stands firmly against any meaningful educational reform such as school vouchers.  Newt has also gone on record with support of Obamacare’s mandate to force individuals to buy health insurance.

The Wall Street Journal has suggested that Newt is weak-kneed on spending restraints.   During his 16 years in Congress, while touting the evils of the New Deal welfare state, he voted for every kind of welfare program  that crossed his desk, from a $40 billion  bail out of  failed savings and loan institutions, $52.6 billion for agriculture subsidies and food stamps, to a $66.5 billion for housing and community development.   As part of his Contract with America he called on Congress to reject further increases in the National Debt Limit but turned around and voted with liberals to raise the ceiling by an additional $49.1 billion.  He called for a more frugal government while voting for 13 appropriation bills loaded with pork and against an amendment offered by Rep. Gerald Solomon of New York to balance the budget by 1999 with $698 billion in spending cuts over a five year period.

He voted with environmentalists for the Alaska Lands Bill which locked up 68 million acres of wilderness; voted for $307 million for continuation of the Endangered species Act; he voted to elevate the Environmental Protection Agency (EPA) to cabinet level status; and in 1990 he voted for the Clean Air bill which required radical cuts in industry and automobile emissions, adding tens of billions in annual costs.

Despite playing to the religious right, Newt voted with the majority in refusing to support a resolution to expel Barney Frank for felony criminal offenses related to his homosexual activities and actively supported the reelection campaign of Steve Gunderson,  praising him as brave for being gay and Republican.

He voted for an amendment to a federal crime bill to establish a National Police Corps.  The unconstitutional bill federalized certain crimes giving the feds police power that the Constitution had reserved to the states.

Governor Jon Huntsman recently quit as Obama’s Ambassador to China so he could foster a run against his boss.  As governor of Utah Huntsman committed Utah to fight climate change through a cap and trade pact called the “Western Region Climate Action Partnership”.   Utah lucked out when the partnership failed.   And, as is usual when pandering to a wider audience, Huntsman has backed away from the mess saying that while it was a good idea at the time, costs are now too much.  Apparently he still believes in the climate change scam.

Huntsman supports civil unions, amnesty, and in-state tuition for illegal immigrants.  He also felt that Obama’s trillion dollar stimulus wasn’t large enough and that health care is a right.  As governor, in 2008 he proposed a gas tax hike in Utah in order to fund a state stimulus.  Tobe fair to Huntsman, during his term as governor he did propose a statewide flat tax, business incentives and private school vouchers.

He touts his Republican values as “right out of the. . .Teddy Roosevelt playbook.” I might remind everyone that Roosevelt has been called our first (at least openly) progressive president.

Does any of this make Huntsman a RINO?  Maybe not as defined as Mitt and Newt,  but it definitely says that, regardless of what he would have us to believe, he is no conservative.  Huntsman has often called himself a non-traditional Republican because Democrats support him.    Progressive John Weaver, an ex-staffer of  John McCain,  launched Horizon PAC as a vehicle to draft Huntsman into running for office.

Progressives believe, in part,  that it is racist to deny illegal immigration (open border and amnesty); that the Supreme Court needs to decide social issues based on their own private standards of moralilty (damn the Constitution);  that abortion is a fundamental right; that people are not smart enough to make their own decisions about their own wealth (redistribution);  that government is responsible for fulfilling the needs of the people (big government);  that the Second Amendment does not apply to private citizens (confiscation); and that humans are responsible for climate change.

Do we really want another 4 years of the same old politics?

← MESSAGE OF INCLUSION OR MASS CONFUSION
“Give Me A Break” →