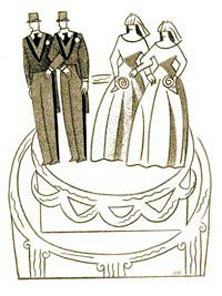 Homosexual activists love to define anyone that disagrees with their agenda as bigoted, homophonic, racist individuals.  Maybe it is they who are bigoted and racists.  Homosexuals have no more right to try and force me to accept their lifestyle that I would have in trying to force them to accept Christianity.

“The agenda of homosexual activists is basically to change America from what they perceive as looking down on homosexual behavior, to the affirmation of and societal acceptance of homosexual behavior.  Thus propagandistic advertising can depict all opponents of the gay movement as homophobic bigots who are not Christian and the propaganda can further show them [homosexuals] as being criticized, hated and shunned. . .” Marshall Kirk and Hunter Madsen “After the Ball”

I was taught to respect people for who they are, not what they are.  As such, I try very hard not to judge people for their personal decisions – that it between them and God.   But, as a Christian, I cannot accept a homosexual lifestyle as normal and those so-called religious institutions that do promote the lifestyle go against the Word of God.

“What the homosexual wants, and here he is neither willing to compromise nor morally required to compromise, is acceptance of homosexuality as a way of life fully on par with heterosexuality.” Barbara Gittings, “Gays on the March”, 1975 TIME magazine

“We can undermine the moral authority of homophobic churches by portraying them as antiquated backwaters, badly out of step with the times. . .Against the mighty pull of institutional religion, one must set up the mightier draw of science and public opinion. . .Such an unholy alliance has  worked well against churches before on such topics as divorce and abortion.” Marshall K. Kirk and Erastes Pill “The Overhauling of Straight America”, 1987

The current debate over whether or not to accept gay marriage has been twisted by homosexual activists and their supporters into a debate over civil rights.  Same sex marriage is not a civil rights issue.   They have not been deprived of equal protection under the law  – only the right to insist that a same sex union is a marriage under state laws.   Demanding that their agenda be accepted as a civil rights issue is an attempt to distort the truth – that they are trying to force acceptance of their lifestyle as a special privilege.  They are not asking to be treated equal under the law, they are attempting to redefine marriage for their own personal agenda – to obtain cultural acceptance of their lifestyle.

Civil Rights as defined by the Nolo’s Plain English Dictionary are those rights guaranteed by the Bill of Rights.   These rights include civil liberties such as freedom of speech, press, assembly and religion as well as due process such as the right to vote, equal and fair treatment by law enforcement and courts, and the opportunity to enjoy the benefits of a democratic society such as equal access to public schools, recreation, transportation, public families and housing.  Nowhere does the Constitution define marriage as a civil right.

States have always passed laws regulating marriage.  Half of all the states prohibit first cousins from marrying and all of the states prohibit marriage of closer blood relatives.  In all states it is illegal to marry more than one person at a time and some states restrict the marriage of people suffering from sexually transmitted diseases.  All states set the legal age to consent to marriage.    If marriage is redefined as a civil right, all state laws governing marriage would have to be abolished.  If marriage is redefined as a civil right could states even rewrite marriage laws that restricted any type of marriage? Could we end up in a society where mothers and fathers are free to wed their offspring or brothers to marry their sisters.  States cannot give special privileges to one group and deny them to another.  Where would it end?

Radical activists led by the ACLU and its allies have consistently tried to divorce America from its Christian heritage and values.  If they can convince the courts or you for that matter that a homosexual lifestyle is normal, natural or good, then they will have succeeded in their attempt to further dilute our moral values.  It is those moral values that define who we are.  The constant chipping away of our values will lead to the demise of this country.  Anyone who doubts this only needs to read the history of Rome.

“There can be a conflict between religious liberty and sexual liberty, but in all cases, the sexual liberty should win because that’s the only way that the dignity of gay people can be affirmed in any realistic manner.” This statement is attributed to Chai Feldblum, former lawyer at the ACLU and now Commissioner at the EEOC.  Chai an avowed lesbian has been an active player in pushing the  LGBT agenda in American culture for over 20 years.  She has authored such articles as “Moral Conflict and Liberty: Gay Rights and Religion”, “The Right to Define One’s Own Concept of Existence”, “Gay is Good: The Moral Case for Marriage Equality and More”, etc.    Chai wants the gay agenda to trump the First Amendment and religious freedom  – to impose the gay agenda on all Americans.

By appointing Feldblum and Kevin Jennings to positions of power within our government, Obama has demonstrated that there is no one person too radical to serve in his administration.  His insistence that DOMA is unconstitutional and his refusal for the government to defend it in a court of law  shows his distain for our Christian heritage.

“A middle ground might be to fight for same sex marriage and its benefits and then, once granted, redefine the institution of marriage completely, to demand the right to marry not as a way of adhering to society’s moral codes but rather to debunk a myth and radically alter an archaic institution.” Michelangelo Signorile, OUT Magazine, 1994

“We are no longer seeking just a right to privacy and a protection from wrong, we also have a right – as heterosexual Americans already have – to see government and society affirm our lives.” Jeff Levi, 1987