Obama wants us to be energy independent – more green oriented like Europe.   Does Europe look good in green? 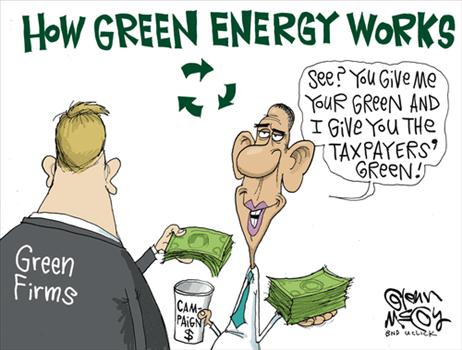 A study of renewable energy in Scotland shows that for every “green” job created, 2.2 jobs are lost in the real economy.

Not only has the sun set on the British Empire, but the promise of wind apparently is deserting as well.  A new study – “Worth The Candle?” by Verso Economics confirms the experience of Spain and other European countries – the creation of “green jobs” destroys other jobs through the diversion of resources and denial of abundant sources of fossil fuels.

The economic candle in the U.K. is being blown out by wind power. The Verso study found that after the annual diversion of some 330 million British pounds from the rest of the U.K. economy, the result has been the destruction of 3.7 jobs for every “green job” created.   British taxpayers, as in the U.S., are being forced to subsidize a net job loss in a struggling economy.

Total usable output from the 3500  U.K. wind turbines is no more than one single conventional power plant which is still necessary as a back-up when the wind doesn’t blow.  Consumers in the U.K. have to warm their homes with imported vast amounts of power from nuclear reactors in France.

So unpopular are wind turbines in the U.K. the government had to offer bribes to local communities in the form of lower council tax and electric bills.  So riddled with environmental hypocrisy is the lobbying for wind energy that a recent U.K. newspaper report exposed the immense human and ecological catastrophe being inflicted on northern China by the extraction of the rare earth minerals needed to manufacture the great magnets that turbines use to generate power.

The most glaring dishonesty peddled by the wind industry and echoed by gullible politicians in the U.K. is the exaggeration of turbine output by capacity which is  the amount the turbine has the capability to produce – not what they actually produce in power.  The average turbine output is barely 1/4th of their capacity.

Another lie pushed by environmentalists is that wind power is not expensive.  No one would build a wind turbine unless they are guaranteed a huge government subsidy.  Turbines are subsidized at  100 to 200 percent of the value of what they produce.

When a Swedish firm opened the world’s largest offshore windfarm, off the coast of Kent, at a cost of 880 million pounds, consumers were told it would provide 300 megawatts – enough power to provide “green” power for tens of thousands of homes.  Turns out, actual output is only 80 megawatts, 1/10th of that supplied by a gas fired power station for which taxpayers will be subsidizing at a cost of 60 million pounds a year or a total of 1.5 billion pounds over the 25 year lifespan of the turbines.

Another lie pushed by the environmentalists is that it will reduce CO2 emissions.  Actually, the reduction achieved by wind turbines is so insignificant that one large windfarm saves less in one year than one jumbo jet flying daily for the same period between Britain and the U.S.   The construction of turbines generates enormous CO2 emissions as a result of mining and smelting the metals used, the carbon intensive cement needed for foundations, the building of miles of roads to transport the turbines to the site,  miles of power lines  and the  CO2 generated by the gas fired power stations running 24/7 to provide back-up.  Where’s the savings?

Wind and solar power has proven to be a disaster in Germany, Denmark and Spain.   Wind turbines are so expensive that Holland recently became the first country in Europe to abandon its renewable energy target, saving billions in euros.

Is the U.S. destined to repeat the same mistake?  It is if Obama and his “sky-is-falling” cronies have anything to do with it!

Instead of a touted 3 million job gain from alternative energy, using the U.K. model, the U.S. can expect the loss of 6.6 million jobs in the real economy.    Job losses could be even greater if you count the lost industry jobs that are moved overseas due to high energy cost.

Wind energy can’t hold a candle to other more traditional and more reliable forms of energy.  Only continuous subsidies and redistribution of resources to an unproductive and uncompetitive source of energy keeps the alternative energy industry alive, politically and economically.

Have the people in America lost their ability to read or think for themselves?  Are we willing to follow the pied piper to a needless economic death?

Alternative energy will not create jobs, make us energy independent or save the planet.