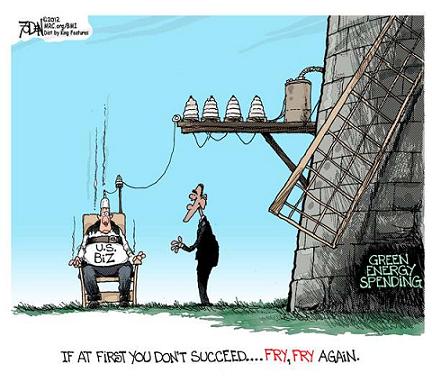 First it was the release of a video of Obama’s top administrator for the EPA Texas office telling his workers that his philosophy of enforcement against fossil fuels compared to Roman crucifixions and then  that little embarrassment of Obama losing 41% of West Virginia’s primary vote to a convicted felon and, ta-da, just like magic,  Obama discovered that coal isn’t as “dirty” as he originally thought.   Will miracles never cease?

In an attempt to woo back voters from coal mining states, the energy policy page of BarackObama.com quietly inserted  a section for “clean coal” even claiming  that his stimulus packaged “invested substantially in carbon capture and sequestration research.”

Don’t get too excited, Obama’s deep hatred for coal will find its voice again  —  especially if he wins in November.

But what Obama and  his ilk can’t get through their thick little Socialist skulls  is that coal will play an important part of our recovery and our future!

Information technology has had and continues to be an integral feature of all aspects of the above factors and is now an enormous and fast-growing part of the economy.  In today’s America, the $1.1 trillion share of our economy devoted to information and ideas — moving bits — has surpassed the share associated with transporting people and stuff.  The gap will widen.  This is the future as well for developing nations.

Making and moving bits involves everything from digital movies and server farms, from iPhones and Intel to Netflix and Facebook, all with much more growth potential than all aspects of the classic transportation sector,  which includes everything from making and using cars and airplanes, from F150s to Norfolk Southern and FedEx.

In the decade following 2000, the transportation sector of the U.S. GDP grew only 15%, while the information sector grew 45%.   The rise of the Information Economy is driven primarily by the historic, and on-going radical drop in computing costs.

The Cloud:  Centralized computing power expands exponentially in the Cloud, already comprised of tens of thousands of data centers any one of which has trillions of times the compute power of old mainframes or modern laptops.

Smart Things:  Since 2003 more things than people on Earth were connected to the Internet.  With a decade IBM and Cisco forcast a trillion things will be connected.  Any object, from lights and shoes, to doors and sphygmomanometers can have embedded logic and wireless connections.

Data center energy consumption already rivals energy use associated with global aviation.  And while computing and storage technology efficiencies will continue to improve, total data center electricity use is forecast to grow rapidly.  By 2020, the world’s data centers alone will consume over 1.5 trillion kWh of electricity.  That totals more than the countries of Japan and Germany combined.   According to the International Energy Agency forecast, that amount of electricity will be supplied by almost 500 million more tons of coal per year.

The future demand for coal as a primary fuel source is, to state the obvious, fundamentally anchored in electricity demand and the cost of electricity produced is a large factor in  keeping new information technology affordable for consumers.

Did you know that states that don’t rely on coal to generate their electricity pay nearly 70% more for power?    At a time when the economy is in the tank why is Obama and the EPA insisting on imposing job killing regulations on coal?   Now is not the time to add pain at the plug to our pain at the pump!

← ObamaCare: The Whole Truth
Mr. President, We Need You To Stand For What Is Right, Not What Is Popular →