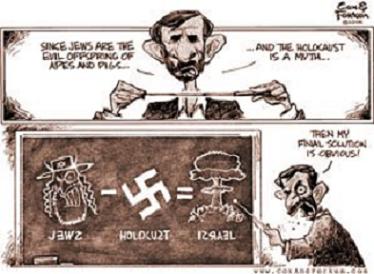 Last Sunday, addressing a gathering in Tehran, Major General Hassan Firouzabadi, chief of staff of the Iranian armed forces vowed the “full annihilation of the Zionist regime of Israel to the end.”   During his speech he reminded his audience that Supreme Leader Ali Khamenei considers “defending Palestine a full religious duty” and will never recognize any authority in Palestine except Palestinians.

A few days earlier, Jose Maria Aznar, former prime minister of Spain, during a presentation at the Jerusalem Center for Public Affairs, recalled a private discussion in Tehran in October of 2000 with Supreme Leader Ali Khamenei, who told him that “War against the United States and Israel is inevitable” and “Israel must be burned to the ground and made to disappear from the face of the Earth.”  According to Aznar, Khamenei said that Israel was “an historical cancer”.  He meant “physical termination through military force.”

Khamenei was also candid with Aznar about the 1979 Islamic Revolution which he said was to rid the world of two evils:  Israel and the United States.  Khamenei said that eventually, there must be an “open confrontation” and it was his duty to ensure that Iran prevailed.

So, is the Obama administration naive to believe that he can negotiate or sanction Iran out of building nuclear weapons or just flat out lying to the country?  I’m thinking it’s a little of both, with a dash of desperation.   No deal was reached at the P5+1 meeting which will give Iran bragging rights that they have once again defied the evil Western nations.

The U.S. and Israel are making plans for a “possible strike” while “hoping” to resume talks later this year.   Obama’s strategy is to keep these talks going as long as possible to prevent Israel from taking Iran’s nuclear facilities out.  He can’t afford to have Israel bomb Iran before the November elections as it would, more than likely, seal his fate.   Iran is willing to continue the talks as a stall tactic while it completes its nuclear program.

If you are to believe Ali Khamenei and Major General Firouzabadi, there should be no doubt that the acquisition of nuclear weapons is top  priority.  The notion that Iran is only making “a peaceful bid to generate electricity” or that they want nuclear weapons as a deterrent because they fear foreign aggression, is nothing but wishful thinking and self-delusion, if not blatant disinformation.

Anthonly Cordesman, a security analyst at the Center for Strategic and International Studies, used to be a skeptic about Iran’s nuclear ambitions until he examined hundreds of pages of evidence compiled by the International Atomic Energy Agency.  Cordesman’s report “Rethinking Our Approach to Iran’s Search for the Bomb” concludes:

Besides being committed to war, genocide, and developing nuclear weapons, Iran’s rulers are the world’s leading sponsor of terrorism.  They support Hezbollah and Hamas and collaborate with al-Qaeda.  They have been responsible for killing Americans in Lebanon, Iraq and Afghanistan.  They have violated the most fundamental tents of international law, by, among other things, seizing the U.S. embassy in Tehran in 1o979, ordering the murder of a British novelist in 1989, and plotting to bomb a restaurant in Washington, D.C., only last year.

Testifying before the House Committee on Foreign Affairs last week, Mark Dubowitz of the Foundation for Defense of Democracies, warned Congress that Iran’s negotiators  at the P5+1 will offer concessions that sound meaningful, but are not, in exchange for Western concessions, that sound trivial but amount to capitulation.  He cautioned that it will require vigorous congressional oversight to make sure that Western diplomats do not provide Iran with “sanctions relief in the shadows”  —  that, specifically, insurance, energy, financial, and shipping related sanctions that have already been passed into law will fail to be strictly enforced in order to keep “the process” going.

Read “What Iran’s Rulers Want” by Clifford D. May, Foundation for Defense of Democracies.