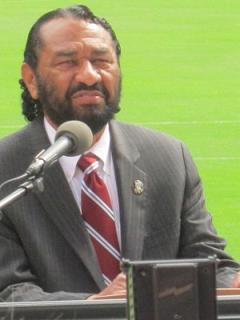 Texas Democrat, Al Green, is concerned that Representative Peter King’s hearings on “radical Islam” are racist  and wondered if King planned on holding hearings on the “radicalization of Christians.”  “People who see the hearing and never hear about the hearings on the radicalization of Christianity have to ask themselves ‘why is this missing?’ Why don’t we go to the next step and ask, how is it that a blue-eyed, blond-haired, white female in the U.S. of American can become radicalized to the point of wanting to do harm to this country?  We don’t have that type of hearing.  That’s the problem.”   Me thinks that Representative Green is showing his racist side!

Is this man for real?    Does he really expect Congress to investigate soccer moms or at least those who have blue eyes and blond hair?  Last year Green got into a heated discussion with Republican members of the Homeland Security Committee wanting to know why they didn’t include the KKK as a terrorist organization.  Representative Colonel Allen West said that bringing the KKK into the debate showed an unwillingness to deal with the terrorist threat.  West, who grew up in Georgia, said “the days of the KKK are done.” There is no equivalency of threat between al-Qaeda and Neo-Nazis, environmental extremists or other isolated madmen.

Congress is looking into Muslim radicalization in America as it poses a threat to American citizens and American property but,  the  next time the government sees a mob of Baptist murdering American troops on American bases  or a waive of Catholic suicide bombers blowing themselves up in public places or a gang of terrorist Jews flying planes into American skyscrapers or a group of Mormons trying to sneak on planes wearing suicide underwear,  or those radical blue-eyed, blond women threatening to blow up New York’s transit system, they have our permission to hold hearing on “radical Christianity”  but until then, liberal Democrats like Al Green needs to pull their collective heads out of their butts.

You think Green knew about the 4th annual Khilafad Conference that was to be held last Sunday in Illinois.?  Hizb-ut-Tahrir, the organization that hosts the conference is a radical organization that promotes worldwide jihad and targets young children from ages 9 to 18 to join their movement.   While the group is banned in Germany, Russia and several Arab countries,  they are apparently welcomed by the likes of Green  to organize and recruit  on American soil.  The conference conveyed an overarching message staunchly opposing capitalism and democracy, claiming  that Jews and Christians won’t ever be truly happy with Muslims until they adopt the Muslim way of life.

Liberal Democrats aren’t the only ones attempting to embarrass Representative King.  The Council on American-Islamic Relations (CAIR) has concluded that even holding these hearings shows that  King has  an  anti-Muslim bias.  That certainly isn’t any surprise.   CAIR, with ties to the radical Muslim Brotherhood, has its own political agenda to undermine America from within.  And they will continue that political agenda as long as Obama has them on speed-dial and liberal democrats continue spouting their vile attacks against Conservatives and Christians.    Read the Wahhabi Soft Jihad for background information on CAIR and the Muslim Brotherhood.

Christians nor Conservatives  have a  bias against the Muslim faith.  We do, however, recognize that Islamic terrorists are recruiting American Muslims with the intent to kill us. The truth is the truth and its about time the liberal Democrats and the media wake up!