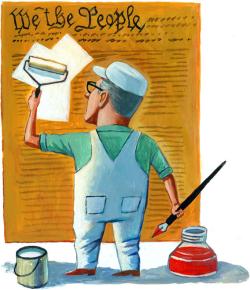 Has Romney  made his decision on his Vice Presidential pick?  Republicans are beginning to fall all over themselves in  an effort to redefine Natural Born Citizen which would clear Rubio for the GOP ticket.

In an article Fred Thompson  wrote, “Is Rubio Eligible?” Thompson  calls the matter of Rubio’s eligibility a legal issue.   Thompson is wrong, it is not a legal issue for liberal justices to dictate based on their own political bias.  It is a Constitutional issue.   Thompson also maintains that he can not sit back and watch Rubio get caught up in a bunch of foolishness that misleads people about his eligibility to be president.   When did Republicans start to mimic Democrats on the validity of the Constitution?  When did the Constitution become foolishness to the Republican party?

Thompson further stated that in 2011, the Congressional Research Service accurately stated that “the weight of legal and historical authority indicates that the term natural born citizen would mean a person who is entitled to U.S. citizenship “by birth” or “at birth”. . .by being born in the U.S.. and under its jurisdiction, even those born to alien parents. . .” This is  the same “opinionated argument” that has been used to bestow Birthright Citizenship on children born on U.S. soil to illegal aliens.

Attorney Mario Apuzzo wrote a response to Thompson’s article citing Minor v Happerset, 88 U.S. 162, 167-68  (1875) where the court had to rule on whether a child born in the jurisdiction to alien parents is a citizen of the U.S. under the 14th Amendment.   The court concurred that “native or natural-born citizens are those born in the country of parents who are citizens” and even stated that there was no doubt about the definition of a Natural Born Citizen that they gave in their decision.

Prior to the 14th Amendment, citizens of the U.S. was never defined because only state law could make a person a citizen of that state which in turn automatically made them a citizen of the United States under Article 4.

Whatever might have been the understanding of “natural born citizen” prior to 1866, the adoption of the 14th Amendment  sit in stone a national rule declaring who are citizens through birth or naturalization.  Who may be considered born as a citizen is conditional upon being born “subject to the jurisdiction” of the United States.  The legislative definition of “subject to the jurisdiction thereof” was defined as “not owning allegiance to anybody else.”

U.S. Attorney General, George Williams, ruled in 1873 the word “jurisdiction” under the Fourteenth Amendment “must be understood to mean absolute and complete jurisdiction, such as the United States had over its citizens before the adoption of the amendment.  Political and military rights and duties do not pertain to anyone else.”

Under the laws of nature, every child born requires no act of law to establish the fact the child inherits through nature his/her father’s citizenship, as well as his name through birth.  This law of nature is also recognized by law of nations.  Senator Howard said that citizenship under the 14th Amendment was by virtue of “natural law and national law.”

Under Section 1992 of U.S. Revised Statutes (1866) other nation’s citizens would not be claimed:  “All persons born in the U.S. and not subject to any foreign  power, excluding Indians not taxed, are declared to be citizens of the U.S.”  As the court has consistently ruled without controversy, change of location never changes or alters a persons allegiance to their country of origin except by acting in accordance to written law in throwing off their previous allegiance and consenting to a new one.

When a child inherits the citizenship of their father, they become a natural-born citizen of the nation their father belongs to regardless of where they might be born.  Citizenship through descent of the father was recognized by U.S. Naturalization law whereby children became citizens themselves as soon as their father had become a naturalized citizen, or were born in another country to a citizen father.

Which brings us back to Marco Rubio.  Marco’s parents  were Cuban refugees who were granted political asylum and permanent residency in the U.S.  Marco Rubio was born in 1971 on American soil but his parents did not obtain citizenship until 1975 making Rubio a naturalized citizen.    His parents could not confer citizenship on Rubio at birth because they were not citizens themselves.     That is, unless you use the argument of Birthright Citizenship.  But is that enough to let him become president?

Article II states: “No person except a natural born citizen, or a citizen of the U.S. at the time of the Adoption of this Constitution, shall be eligible to the Office of President; neither shall any person be eligible to that office who shall not have attained to the age of thirty five years and been fourteen years a resident within the U.S.

3 comments for “What Defines A Natural Born Citizen?”