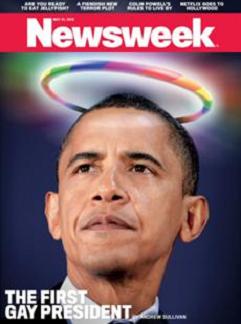 Reverend William Owens, president of the Coalition of African-American Pastors, announced at a press conference that the group is launching a national campaign aimed at rallying black Americans to rethink their overwhelming support for Obama since he announced his support for same sex marriage in May.  “The time has come for a broad based assault against the powers that be that want to change our culture to one of man marrying man and women marrying women.  I’m ashamed that the first black president chose this road, a disgraceful road.”

Pastor Owens said that there were 3,742 African-American pastors on board for the anti-Obama campaign.  The group has set their first fundraiser for August 16 in Memphis, Tennessee, but Owens said “we are going nationwide with our agenda just like the President has gone to Hollywood.”

Will black churches stand true to their faith or cave since now that the  Democratic party has opened a can of worms by  announcing  plans to include support of same-sex marriage in their national platform?   Even better, will all Christian churches stand with their brethren to defeat what God defines as an abomination, or will political correctness win again?

The National Organization for Marriage president Brian Brown says that  the Democratic Party has been “captured by extremists. . .like Barney Frank and Nancy Pelosi who are determined to redefine marriage” in America.  It’s coastal liberals in states like California, New York, and Massachusetts that are more and more shaping the direction of the Democratic Party, leaving behind Democrats with social conservative values.  I think it’s particularly ironic that the Democrats are choosing to introduce for the first time the idea that they are corporately behind redefined marriage in a state [North Carolina] where all the evidence suggests a majority of Democrats just voted in May to define marriage as a union between a husband and wife.”  The amendment passed by a 61% approval.

Will this platform sink the Democratic party?  A large portion  of their supporters are Christians!

I’m reminded of that song “You’ve Got To Stand For Something Or You’ll Fall For Anything”.    You’ve got to be your own man, not a puppet on a string.  Never compromise what is right – whatever you do today you have to sleep with tonight.  Do we please God or do we please men?  The decision is yours – but never forget – God is the utimate judge.

“Because strait is the gate, and narrow is the way, which leadeth unto life, and few there be that find it.  Beware of false prophets which come to you in sheep’s clothing, but inwardly they are ravening wolves.  Ye shall know them by their fruits. . .Wherefore by their fruits ye shall know them.  Not every one that saith unto me, Lord, Lord, shall enter into the kingdom of heaven; but he that doeth the will of my Father which is in heaven.  Many will say to me in that day, Lord, Lord, have we not prophesied in thy name? and in they name have cast out demons? and in they name done many wonder works?  And then will I profess unto them, I never knew you: depart from me, ye that work iniquity.”   Matthew 7:14-23

2 comments for “You’ve Got To Stand For Something”