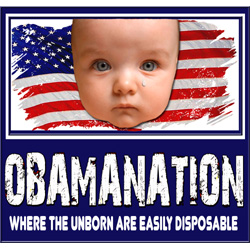 U.S. District Judge James Teilbog said that Arizona’s ban on abortions starting at 20 weeks of pregnancy is constitutional because it doesn’t prohibit any woman from making a decision to end the lives of their unborn babies, it just makes them decide earlier.  Judge Teilbog also wrote that Arizona provided “substantial and well-documented” evidence that an unborn child has the capacity to feel pain during an abortion by at least 20 weeks.

Janet Crepps of the Center for Reproductive Rights argued at the hearing that under the “1973 Roe v Wade ruling, states can only regulate how abortions are performed, not ban them, before a fetus is viable” (able to live outside the womb).  Apparently torturing an unborn baby doesn’t bother them.

After Judge Teilbog’s ruling,  the “murder at all cost” crowd crawled out of the woodwork calling the decision a threat to women’s lives, totaling disregarding the fact that the Arizona law does allows abortions for medical emergencies.

Calling an unborn child a fetus makes it appear to be nonhuman thus alleviating any guilt at disposing of it.

But an unborn child is a human being capable of feeling pain.  Pain receptors are present throughout the unborn child’s entire body by no later than 16 weeks after fertilization and nerves link these receptors to the brain’s thalamus and subcortical plate by no later than 20 weeks.  According to Dr. Paul Ranalli, a neurologist at the University of Toronto, 20 weeks is a “uniquely vulnerable time, since the pain system is fully established, yet the higher level pain-modifying system has barely begun to develop.”  As a result, unborn babies at this age probably feel pain more intensely than adults.

By 8 weeks, the unborn child reacts to touch.  By 20 weeks, the unborn child reacts to stimuli that would be recognized as painful if applied to an adult human, for example, by recoiling.  Surgeons entering the womb to perform corrective procedures on unborn children have seen those babies finch, jerk and recoil from sharp objects and incisions.  Ultrasound technology shows that unborn babies at 20 weeks and earlier react physically to outside stimuli such as sound, light and touch.

Despite the child’s advanced development at 20 weeks, abortions are performed by:

Dilation and Evacuation (D&E):  Sharp edged instruments are used to grasp, twist, and tear the baby’s body into pieces.  This continues until the child’s entire body is removed from the womb.  Dying just as you or I would, this mutilated child bleeds to death as it is torn limb from limb.

Digoxin abortion:  A drug called digoxin is injected directly into the baby’s heart, giving the child a fatal heart attack.  The dead baby is then dismembered and  removed.

Saline abortion:   Salt water is injected into the womb through the mother’s abdomen.  The child swallows this fluid, is poisoned, and dies in a process that sometimes takes 24 hours.   You might call it a slow agonizing death.

Partial-birth abortion (D&X):  The baby is delivered feet first –  up to the head and then the doctor punctures the baby’s head at the base of his/her skull and suctions out the brain, immediately killing the child.

In a recent campaign speech in Portland, Oregon,  Obama called for more blood money to fund even more deaths.  I wonder if he mentiomed, or even if he cares, that just last Friday, a young woman died in a blotched abortion at one of Planned Parenthoods Murder Centers.  Planned Parenthood performed a Dilation and Evacuation (D&E)  on the young woman and were so concerned with her  health that they waited five and one-half hours before sending her to the emergency room where he died.  Her family is planning to file a suit against the Center.    It is just too bad that they can’t sue those that made murder legal.

“What an irony that a society confronted with plastic bags filled with the remains of aborted babies should be more concerned about the problem of recycling the plastic.”   Winifred Egan

← A Great Mourning on the Horizon
Putting the U.S. Debt in Perspective →