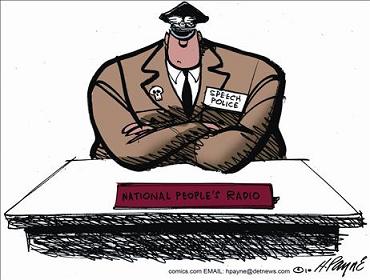 The term “hate speech” has been around for quite a while. It was Bill Clinton who gave a speech after the Oklahoma bombing in which he said that the nation’s airwaves are too often used “to keep some people as paranoid as possible and the rest of us upset with each other. [Such people] spread hate, that leaves the impression that, by their words that violence is acceptable. . .It is time we all stood up and spoke out against that kind of reckless speech and behavior.” Of course, I haven’t heard Bill or Hillary or the President condemn the hate speech against the tea party movement – as a matter of fact, they have been guilty of it themselves. Or is it only hate speech if it comes from the right?

The new Black Panther movement is on video with such taunts as ” I don’t give a d*** what they may think about white people. I hate white people. All of them. Every last iota of a cracker I hate him.” “You want freedom you’re going to have to kill some crackers. You’re going to have to kill some of their babies.” WHERE IS ERIC HOLDER WHEN YOU NEED HIM? Although the video on YouTube has been removed, they still have the transcript for all to read.

The far left loonies, the socialists progressives are all guilty of exactly what they are accusing the right of doing. Perhaps we should consider filing a petition with the FCC against them. It may be a “get them before they get us” mentality but it’s time Americans stood up and said We’re mad as hell and we’re not going to take it anymore!

Leftist lawyer Gloria Alfred likes to say that there is a difference between “free speech” and “hate speech” – the former being protected by the U.S. Constitution and the latter must be criminalized. Is free speech a radical version of what we like and hate speech is anything we oppose? Free Speech – Burning the American Flag; Hate Speech – insulting the Koran! Painting Jesus in urine and Mary in feces is free speech but a cartoon of Muhammad is hate speech! A black English Professor at Virginia Tech, Nikki Giovanni chose to eulogize the victims of the Virginia Tech Massacre with the following  poem. You decide if it is free speech or “hate speech”. [You must forgive me but I can not bring myself to use the “n” word as Professor Giovanni
did.]

Professor Giovanni has been celebrated as Ebony Magazine’s Woman of the Year; received keys from New York, Dallas, Baltimore, New Orleans, Miami and Los Angeles; and dozens of other awards and honors. But, telling young Black students that they are n****** unless they kill “honkies” is treated as free speech! What is wrong with this picture?

← Putting the U.S. Debt in Perspective
A Tribute to Chick-fil-A and a Thank You for the Chickens →