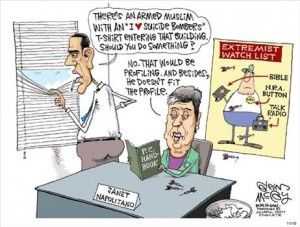 Political Correctness is a cancer that destroys the very fabric of our society.    It is censorship in the purest form, forcing the majority to yield to the minority.

We have been taught, thanks to the teaching of Political Correctness, to close our eyes and ignore what is right in front of us –  a government that is unable or unwilling to name our enemies.  Instead of Muslim terrorists, the Department of Homeland Security would rather identify tea party members and returning veterans as potential enemies of the State. While  playing the PC game, they are moving terrorist into our own government.

In 2009 Attorney General Eric Holder announced that we would no longer refer to enemies captured on the battlefield as “enemy combatants”.  The President has redefined the “war or terrorism” as the “overseas contingency operation”, and acts of terrorism are now referred to as “man-made disasters.”  Whatever P.C. whitewash the government tries to put on it  they cannot hide the fact that –  we are at war with Muslim terrorists who are out to kill us!

When the 112th Congress convenes, Rep. Peter King, R-NY, the next chairman of the House Committee on Homeland Security, told the New York Times that hearings in his committee early next year will center on the radicalization of the Muslim community in the United States. Rep. King explained that the hearings were prompted by frequent concerns raised by law enforcement over uncooperative Muslim leaders in terror investigations.   The Committee should begin their investigation with members of our own government.

Abdulrahman Alamoudi, the Muslim leader who must frequently visited the Clinton White House, was asked by the Defense Department to establish the military’s Muslim chaplain corps and then appointed by the State Department to serve as a civilian ambassador.  Days after the 9/11 attacks, he appeared with President Bush and other Muslim leaders at a press conference, despite his public comments a year earlier identifying himself as a supporter of Hamas and Hezbollah.  In July 2005, the Treasury Department revealed that Alamoudi had been one of the top fundraisers for al-Qaeda.  While he is currently serving a 23 year prison sentence, many of the chaplains he recruited and trained as well as other individuals he helped place in high positions throughout our government are still there today.

Anwar al-Awlaki, al-Qaeda’s new rising star, was the subject of an FBI investigation beginning in 1999.  He was interviewed by the FBI at least 4 times after 9/11 for his contacts with two of the hijackers.  But still, he was allowed to lead prayers for congressional Muslim staffers inside the U.S. Capital;  prayer meetings  attended by Nihad Awaid of the Council on American-Islamic Relations (CAIR), and Randall “Ismail” Royer, who was later arrested and pled guilty to conspiring to support a foreign terrorist organization.    If that is not enough to make you shudder, al-Awkaki was feted at a luncheon inside the Pentagon hosted by the Army’s Office of Government Counsel following the 9/11 attacks.  He is now subject to a “kill or capture” order signed by Obama.

Ali Mohamed was expelled from the Egyptian army in 1984 for his sympathies for the assassins who gunned down Egyptian President Anwar Sadat.  Egyptian authorities warned us of his ties with terrorist groups and his extreme ideology but he was still allowed to enter the United States and enlist in the Army Special Forces at Fort Bragg.  While officially a supply sergeant, Mohamed spent most of his time training American soldiers in Arabic culture and even starred in several videos produced by the Special Forces school.  At the same time he was serving in the Army, he was also schooling U.S. Islamic militants in weapons, explosives and martial arts – including the cell responsible for the 1993 World Trade Center bombing.  After the 1998 U.S. Embassy bombing, the FBI finally got around to investigating him and he was indicted as part of the embassy bombing plot.  Mohamed plead guilty to several counts of conspiracy to kill U.S. soldiers and diplomats and for plotting to kill U.S. citizens.

Anwar Hajjaj, a local Islamic cleric who  leads prayers for the Congressional Muslim Staff Association,  also headed the Taibah International Aid Association which was designated a global terrorist organization by the Treasury Department in May of 2004.  He also served as director of the World Assembly of Muslim Youth (WANY) headed by Osama bin Laden’s nephew, Abdullah bin Laden, who left the country when WANY offices were raided by the FBI in June 2004.  Hajjaj was also president of Dar al-Hijrah Mosque in Falls Church where al-Awlaki served as imam and where at least two of the hijackers attended services.  Hajjaj asked Rep. Gregory Meeks, D-NY, to intervene on his behalf with the Department of Homeland Security for what he said was harassment he received when returning to the U.S. from trips to Saudi Arabia.  “It was an awful experience under the Bush Administration.  Now under Obama,  I have no complaints.” Rep. Meeks said he was asked to intervene by a mutual acquaintance, Jameel Johnson.  Meeks also has also employed Jihad F. Saleh and Jameel Johnson.

Jihad F. Saleh, a legislative assistant to Rep. Meeks focusing on education, homeland security and government reform,  was the Program and Outreach Coordinator for CMSA, founded by Jameel Johnson, and an alumnus of the Muslim Public Service Network (MPSN) in D.C.  working closely with CAIR.  According to the book “The Muslim Brotherhood”, Saleh compiled  a collection of resumes from the Muslim Brotherhood front groups such as CAIR and ISNA and presented them to President Obama.  One from this group, Dalia Mogahed, an Egyptian born Muslim, has already been hired to brief the president.  Both CAIR and ISNA have  been identified as having links to terrorist groups.

Jameel Johnson, chief of staff for Rep. Gregory Meeks until 2008, founded the Congressional Muslim Staffers Association (CMSA).  In 2007 Johnson organized a Muslim Mobilization Conference at the Cannon House Building Caucus Room.   The Sergeant-At-Arms cancelled the meeting when he discovered that terrorist linked speakers would be at the Conference. Some of the speakers included Mauri Saalakham, leader of Peace and Justice Foundation which had voiced support for designated terrorists organizations and convicted terrorists;  and, Anisa Abd El Fattah, former president of USAR which a convicted terrorists leader described as the political command for HAMAS in the U.S.  She also co-authored two books with Ahmal Yousef, spokesman for HAMAS and was a long time consultant to terrorist Abdurahman Alamoudi. Other speakers scheduled for the Conference were Mauri Sallakhan  and Fawaz Damra,  both convicted as Palestinian Islamic Jihad fundraisers; Sheik Ahmed Yasin, founder of HAMAS and Mousa Abu Marzook, HAMAS deputy political leader and fundraiser who has since been deported.

Faisal Gillwas appointed, along with Abdulrahman Alamoudi, to a position at the Department of Homeland Security as a special assistant for Information Analysis and Infrastructure Protection.  He forgot to inform DHS that he was a former director of government relations for Alamoudi’s American Muslim Council.  At DHS he had access to a wide range of top secret information including vulnerabilities of national critical infrastructure.  Gill was temporarily removed from his position in 2004 but reinstated after recommendations from Senators Grassley and Kyle.  He resigned in 2005, made an unsuccessful attempt to run as a Republican candidate for the Virginia House of Delegates in 2007, and then opened a lobbying firm, Sapentia, with Asim Ghafoor, a previous spokesman for Global Relief Fund which was closed by the government in 2001 for funding al-Qaeda.

Hesham Islam, was a senior advisor for international affairs for Deputy Defense Secretary, Gordon England, until it was discovered that he had been inviting representatives from terrorist groups into the Pentagon.  He was fired.

The Muslim Public Affairs Council (MPAC) is training 2,200 Transportation Safety Officers at the Los Angeles International Airport in the diversity of Muslims, from cultural dress to language to tenets.   In 1986 MPAC was formed as a political action arm of one of the largest Wahhabi mosques in American, the Islamic Center for Southern California, founded by Hassan Hathout and his brother Maher Hathout. Hassan was a senior member of the Muslim Brotherhood Movement.  His brother Maher was also on the board of directors and a member of the American Muslim Council founded by the al-Qaeda financier and Hamas operative Abdurahman Alamoudi.   MPAC, which a reputation in official U.S. circles as a moderate Muslim organization, was founded as a propaganda and misinformation ministry for the Muslim Brotherhood.

“In order for Islam and its  Movement to become a part of the homeland in which it lives, stable in its land, rooted in the spirits and minds of its people, enabled in the lives of its society and has firmly established organizations on which Islamic structure is built and with which the testimony of civilization is achieved, the Movement must plan and struggle to obtain the keys and the tools of this process to carry out this grand mission as a Civilization Jihadist responsibility which lies on the shoulders of Muslims and on top of them the Muslim Brotherhood in this country.” taken from a captured document of Mohamed Akram during the investigation of the Holy Land Foundation

Is the government following the old adage – keep your friends close and your enemies closer – or is it just incompetent?  Considering the number of  terrorist linked Muslims that are working closely in and with our government – I have to go with the incompetent theory!

2 comments for “POLITICAL CORRECTNESS IS A CANCER”