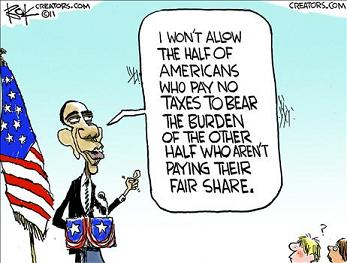 At a fundraising event in Chicago this past Sunday Obama explained why he was running for re-election.  “Too many folks still don’t have a sense that tomorrow will be better than today.  And so, the question in this election is which way do we go?  Do we go forward towards a new vision of an America in which prosperity is shared? Or do we go backward to the same policies that got us in the mess in the first place?  I believe we have to go forward.  I believe we have to keep working to create an America where no matter who you are, no matter what you look like, no matter where you come from, no matter what your last name is, no matter who you love, you can make it here if you try. . .”

Obama  doesn’t think that America’s greatness would exist or ever existed without the government.

Before 1880 there were many who managed to not only exist but thrive without government.  Take Benjamin Franklin who invented the lightening rod, the Franklin Stove, bifocal glasses, the flexible urinary catheter and who held over 1,000 patents for his inventions.  There was George Washington Carver, born into slavery, who discovered more than 450 products that could be made from peanuts and other cultivated plants.  Thomas Edison who invented the practical light bulb;  Issac Singer who invented the first commercial sewing machine; Alexander Graham Bell who invented the phone; John Moses Browning who invented the gas operated return mechanism for rifles; Samuel Colt who  made the Colt revolver; Robert Fulton whose innovations to the steam engine helped commercialize the steamboat; Samuel Morse who invented the telegraph and Morse code, etc.  These are just some of the people who made America great – not the government.

Immigrants flocked to America because it was the land of the free where they could make a better life for themselves and their families.  They risked their lives, in many instances,  for a chance at the American dream.   They fled oppressive regimes much like Obama’s vision for America.

What Obama can’t grasp is that we do not want to go back to the policies that got us into this mess.  We want to return to the policies that made America great and those can not be found under Socialism or under the path that the progressive Democrats and Rinos have laid out for us since World War II.  America can not survive as a welfare nation.  If you want proof all you have to do is look at Socialist Europe.

Banks, companies and investors are preparing for a collapse of the Euro.  Cross border lending is down because banks fear losses and asset managers are shunning Europe.

In central Rome sales have fallen 20% over 2011 and in the outer suburbs sales are down 40%.  As the economic crisis hits locals and tourists alike, shops are closing. Italy, the 3rd largest economy in the Euro had its bond rating cut 2 levels by Moody’s because of their debt load, which is the 2nd biggest relative to GDP.   Italy’s unemployment rate hit 10.8% in June of this year, with an employment rate for Italy’s youth at over 30%.

Greece is hopeless despite all efforts to save it.  With an unemployment rate of 23.1% nearly 55% of those ages 15-24 are without jobs.  The clock is ticking for Spain  as they are finding fewer and fewer buyers for its debt.  Investment is down because investors are worried that Spain cannot repay its debt. Spain has an unemployment rate of 24.6% and  53% for those ages 16-24.

It appears that the honeymoon is over for Socialst Francois Hollande elected in May of this year.  With an unemployment rate of 10.1%, the highest in twelve years, youth unemployment is a staggering 23.8%.  Polls show that a majority of the electorate, 54%, declared themselves unhappy with his performance and 51% believed things had only become worse since he was elected.  France is the type of Socialist country that Obama envisions for America.  They own partially or fully large corporation, banks, insurers, power companies, public transport and defense industries.  Their idea of capitalism consisted of government control to maintain social equity through laws, taxes and social spending to reduce income disparity.  Sound familiar?  France’s  public debt is 86% of GDP.

The French government had begun to transition to an economy that relied on free markets until  the people of France, so entrenched in government handouts, rebelled and elected a “real” Socialist, Francois Hollande, who  promised to raise taxes on bank profits, tax the rich and hire another 60,000 government workers to maintain their welfare state.  Unfortunately, Hollande’s tax the rich scheme is prompting the rich to leave, leaving his Socialist government to ponder where they are going to get the needed revenue to reinstate retirement at age 60 and pay all those new government employees.

Britain, while not in the Euro, has an  unemployment rate of 8.4%,  a 16 year high.  Forecasters are calling for the unemployment rate to hit 9%.  Inflation is up and wages are down which means that the  British economy is in a hole dug deeper by the deflationary policies which derailed the recovery.  Part of the solution to bring Britain out of the hole is the layoff of an estimated 700 000 public sector employees.  Wonder how that will play out?  The unemployment rate for ages 16-25 is 22.5%.

America has always been a beacon for the oppressed, a beacon of liberty and freedom.   Our Founding Fathers created a nation that values the individual over the government and gave to  government a role  to create an environment that allows individuals to prosper.  They did not create a welfare state!

Our government is now on track for an unprecedented fiscal disaster.  Our debt is fast approaching the size of our GDP, crushing any chance for robust growth.   America is broke and if we don’t make drastic changes to our budget and lifestyle, we should prepare for the coming disaster.

Perhaps it is time that voters of all political stripes WAKE UP!  Let’s send a message to  Washington that WE CAN HANDLE THE TRUTH, even if it means pain and sacrifice.

This election is the ultimate battle for the soul of America.  Either we defeat Obama  or we raise the white flag of surrender to our ultimate demise.