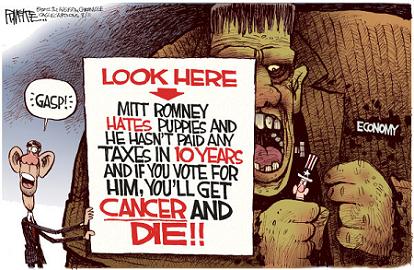 From Biden’s lips to ours – “we can expect even more wealthy, right-wing ideologues lining up to support the Romney, Ryan ticket.  The  people on the “other” side who are attempting to “buy” this election are putting nasty, deceptive TV ads on the air.”      You think Biden forget what ticket he was on?  Oh, and for those who don’t get the “other” side – it’s  Christian, Conservation, Patriotic Americans, or in simpler terms – anyone that isn’t a liberal, progressive or Socialist!

According to Open Secrets, Obama has out raised and outspent Romney two to one.

← As Usual, Obama says one thing but does the opposite
Top 12 Reasons To Vote Democratic →