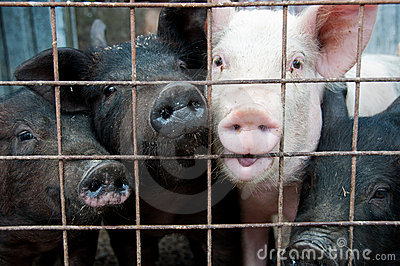 If you guessed profit – you’re right!

The majority of animals raised for food are born in concentrated animal feeding operations (CAFOs).   Since the 1950s most of the poultry we consume were raised in CAFOs and by the 70s and 80s CAFOs had added  cattle and pork to factory farming.

Corporate owned CAFOs have come to dominate animal production industries.  In 1930 there were close to 7 million farms in the U.S. but as of 2002 just over 2 million remained.  According to census figures, from 1969 to 2002 family farms dropped by 39%.  By reducing the cost to produce animal products from birth to table,  CAFOs have made it impossible for small family farms to compete.  But what might be good for the consumer, isn’t necessarily good for the environment and public health.

For those not familiar with CAFO  –  it is a factory farm where animals are kept and raised in confined spaces.  Factory farms congregate animals, feed, manure, dead animals and production operations on a small land area.  Rather than allowing the animals to feed as God intended, animals are confined and food is brought to them.   In addition, these  animals are shot up with antibiotics and hormones to increase corporate profit.

CAFOs generate millions of tons of manure  which pose potential  substantial risks to the environment and public health.  According to the EPA, CAFOs experience twenty to thirty serious  problems each year which are harmful to wildlife and water quality in streams, lakes, rivers and the ocean.   In 1995 a 120,000 sq. ft. manure lagoon ruptured in North Carolina releasing 25.8 million gallons of pollutants into the New River, creating an outbreak of pfiesteria piscicida killing 10 million fish.   Even if the manure lagoons don’t rupture, the release of gas emissions from decomposition of manure –  ammonia, hydrogen sulfide, methane, etc. – poses health risks.

According to the U.S. Center for Disease Control and Prevention, CAFOs can cause adverse health reactions on farm workers such as acute and chronic lung disease and infections that can transmit from animal to human such as tuberculosis.   Pesticides can make their way into consumer’s bodies  through bioaccumulation in animals raised on factory farms.

In general,  CAFOs contribute to contaminated soil, polluted water, poor air quality,  drug resistant bacteria and  health problems that taxpayers are subsidizing.  So why are they still in business?  Money rules!

What other reason could account for  Michigan’s Department of Natural Resources insane  new  rule that benefits factory pig farmers (CAFOs)  over small family farms?  On April of this year the Invasive Species Order went into effect to save Michigan’s citizens from what they define as parasites and disease carrier feral pigs that are a major source of damage to forest, agricultural lands and water resources.  To you and I feral pigs would cover wild boar running free, but not to the bureaucrats in Michigan.  They extended the definition of “feral” to include heritage breed pigs.  Any individual found to be in possession of an “unsanctioned”  pig could be charged with a felony and subjected to up to 2 years in jail and a $20,000 fine.

Surprise, it  was the factory farms in Michigan that backed (and probably paid for) this new rule.  The Agricultural Leaders of Michigan, a coalition of agri-businesses that includes Michigan Pork Producers Assoc.,  not only backed the rule but killed efforts to  delay the new rule from taking effect.   Now the Michigan Department of Natural Resources can seize and destroy private farm heritage breed pigs without compensation.   How better to kill competition?

The Farm-to-Consumer Legal Defense Fund explained that . . .under the declaratory ruling, the department can determine that a hog is prohibited under the new ISO if it possesses physical characteristics common to any pig even if the animal was raised under the husbandry of humans.  In other words, all pigs not raised in confinement cannot possess even one illegal DNR characteristics, listed in the declaratory ruling. This is impossible since all swine will have at least one DNR characteristic and would therefore be an invasive species and illegal to own.”

Thanks to bureaucrats and factory farm money, Michigan citizens will no longer be able to purchase or consume  naturally raised pork from small farmers.

And don’t think for one minute that CAFOs in other states aren’t watching to see if Michigan bureaucrats get away with this infringement on farmers and private property rights.