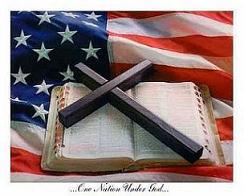 “When the righteous are in authority, the people rejoice; but when the wicked beareth rule, the people mourn.”  Proverbs 29:2

The question has been asked, “Why is it a Christian’s duty to vote?”  It could first be said that it is the honor, privilege and duty of every American citizen (Christian and non-christian alike) to vote.  Voting is a fundamental and critical part of participating in a Republic, which is a representative government “of the people, by the people, and for the people.”   It has also been said that through the process of voting, we can “help determine who will lead our nation, make our laws, and protect our liberties.”   Samuel Adams, one of our Founding Fathers, said it this way, “Let each citizen remember at the moment he is offering his vote that he is executing one of the most solemn trusts in human society for which he is accountable to God and his country.”   This, in and of itself should be reason enough to cast our vote.

Just a little food for thought.  Depending on where you get your statistics, the percentage of “eligible” American citizens who are not registered to vote is between 24 to 28 percent.  That translates to between 52 and 61 million citizens who are not even registered (of the 314 million people in America, roughly 220 million are eligible to vote).  Dr. James Dobson rebuked Christians:  “I think it is a disgrace that half the Christians in America aren’t even registered to vote, and of those who are, only half go to the polls. . .When we withhold our influence and participation, we yield by default to those who promote immoral and destructive policies.”

We are also obligated, not only as Christians, but as American citizens to be informed before we vote.  If any candidate  has any prior political experience, such as a Senator or a Governor,  running for President,  it is a simple matter of public record how each and every candidate has voted in the past. No matter what they may say with their mouths, (some may say one thing in front of one group and another thing in front of another, depending on which voting demographic they are trying to reach), their voting record will faithfully declare what they truly believe and where their morality is.   So, it is up to us to do a little research to discern where they stand.  There are also many good resources available like Voter Guides that can help us make informed, intelligent, and ethical decisions.

This brings us to the question at hand.  Why it is a Christian’s duty to vote?   It has been said that without Christian influence in politics, government will have no clear “moral compass” to guide them.  This can be understood in that being an American is not just about business, the economy, the government, and the military.  It is also about other aspects  such as family, faith and freedom.  All of these areas touch our lives as Christians, but it’s the last three areas that are instrumental to our existence and our prospering as a nation.  In Matthew 5:13-16, Jesus has called us to have a “Salt and Light” impact on our culture and our world.

There are many political “hot spot” issues, that originally began as purely moral issues, that are being debated during the election season.  One such issue is human sexuality.  Questions are raised about traditional marriage and so-called same sex “marriage.”  On a national level, the Defense of Marriage Act defines marriage as a relationship between one man and one woman.  More importantly, in the Word of God, Jesus Himself said, “from the beginning of the creation God made them male and female.  For this cause shall a man leave his father and mother, and cleave to his wife; and they twain shall be one flesh: so then they are no more twain, but one flesh.  What therefore God hath joined together, let not man put asunder.”  (Mark 10:6-9)  With this being said, as far as I’m concerned, the debate is closed!!!

Another issue is regarding the sanctity of life.  Questions are raised about the right to life and the so-called right to “choose.”  There is on-going debate as to when life begins – at conception, at birth, or any time in between.  God said to the prophet Jeremiah: “Before I formed thee in the belly I knew thee; and before thou camest forth out of the womb I sanctified thee, and I ordained thee a prophet unto the nations.”  (Jeremiah 1:5)  Once again, with this being said, as far as I’m concerned, the debate is closed!!!

Another issue is regarding standards for living.  Today we are living in a very secular and humanistic world that is growing much more hostile against people of faith.  Do we not still have the freedom and the right according to the First Amendment of the Constitution to live our life out according to a Christian Worldview?  Perhaps a good question that needs to be asked is, why does one belief system – atheism (the belief that there is no God) and it’s worldview – evolution (the view that everything began without Divine intervention) get taught as the official stance of public schools and universities, but Christianity and the Christian Worldview is shut out under the pretense of the mythical “separation of Church and State?”  Isn’t our tax dollars that fund  public schools and universities, the same as the secular person’s?

Finally, I will end with an earlier statement made, that without the Christian influence in politics, government has no clear “moral compass” to guide them.  If we allow the government, the media, or various activist groups to silence us regarding family, faith, and freedom, then where will morality come from?  Are we okay with how the topic of sexuality is currently being treated?  Are we okay with how the topic of the sanctity of life currently stands?  Are we okay with the field of education currently reflecting a very anti-christian standing?   If not, then come November 6th,  VOTE!!!  Vote your Christian values!!!

Voter participation often suffers because of the generally accepted belief that “one vote really can’t make a difference.

1645:   One Vote  gave control of England to Oliver Cromwell

1800:   One Vote made Thomas Jefferson president instead of Aaron Burr

1876:   One Vote made Rutherford B. Hayes a United States President

1923:   One Vote placed Adolph Hitler as the leader of the Nazi Party

“If America is to survive, we must elect more God-centered men and women to public office  –  individuals who will seek divine guidance in the affairs of state.”  Evangelist Billy Graham

8 comments for “Is It A Christian’s Duty To Vote?”