We owe  Ron Paul, Alan Grayson, Jim DeMint and Bernie Sanders  a thank you for standing up for American taxpayers and demanding an audit of the Federal Reserve. 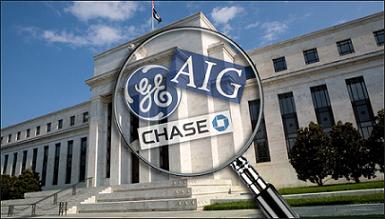 The Paul-Grayson Amendment attached to the Dodd-Frank banking bill that passed last year forced an audit for the first time since the Fed was organized.   While Bernanke, Alan Greenspan and big bankers opposed the audit and even lied  to Congress about the need for an audit, thanks to the persistence of the above listed Senators  and Congressman, from both sides of the isle,  who voted for it,  a  GAO audit has revealed that during the worst economic crisis since the Great Depression, the Federal Reserve had secretly given out $16 Trillion to U.S. and Foreign banks, corporations and governments at near 0% interest, the majority of which has never been repaid.

Senator Bernie Sanders said that “this is a clear case of socialism for the rich and rugged, you’re-on-your-own individualism for everyone else. No agency of the U.S. government should be allowed to bailout a foreign bank or corporation without the direct approval of Congress and the president.”

The non-partisan investigation also determined that the Fed lacks a comprehensive system to deal with conflicts of interest, despite the serious potential for abuse.  In fact, according to the report, the Fed provided conflict of interest waivers to employees and private contractors so they could keep investments in the same financial institutions and corporations that were given emergency loans.”

Talk about conflict of interest  —  JP Morgan Chase served on the N.Y. Fed’s board of directors at the same time that his bank received more than $390 billion in financial assistance as well as serving  as one of the clearing banks for the Fed’s emergency lending programs.

The GAO audit also revealed that on September 19, 2008, William Dudley, who is now the N.Y. Fed president, was granted a waiver to let him keep his  investments in AIG and General Electric at the same time that AIG and GE were given bailout money.

In addition, the Fed outsourced most of its emergency lending programs to private contractors, many of which also were recipients of extremely low-interest and then-secret loans.  These outsourced lending programs went to contractors like JP Morgan Chase, Morgan Stanley and Wells Fargo, the same firms who received trillions in loans.  Morgan Stanley was given the largest no-bid contract worth $108.4 million to help manage the Fed bailout of AIG.

We’ll have to wait until October 18 to get a more detailed GAO investigation into conflicts of interest at the FED.

The institutions that received the most “secret” money from the Fed include:

To see a complete list, go to GAO audit link above, page 131.

This is just another example of the corruption in Washington.  The Fed is nothing but an unelected bureaucracy that can create money out of thin-air and distribute it as a prize to the other corrupt  “elite” that rule the world’s economy.