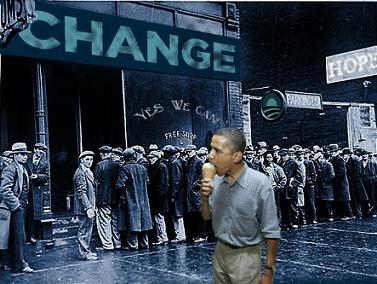 Americans are already facing sticker shock – at the gas station and at the grocery store.  But hold on to  your hats because it will  get worse thanks to Obamanomics.

Due to QE3 and other Keynesian stimulus atrocities, as well as this year’s drought and crop failures,  Americans may soon long for the day of Jimmy Carter’s 21% inflation.

America is in a depression.  The only reason the government achieves any plausible deniability with their assertions that “the economy is improving” is by comparing the obvious visuals:  we don’t have bread lines like they did in the 1930s.  They are right we don’t, at least have bread lines you can see.  The bread lines of today are hidden electronically.   Food stamp recipients are now issued a “debit type card” to pay for their groceries.

At least 47 million American families are on are food stamps.   When Obama removed the work requirement from welfare, the filing for food stamps almost doubled.  In a country that is broke and just digitally printing money whenever they need it, that is a recipe for mass death.

The cost of the “Supplemental Nutrition Assistance Program” as it is now called, for the fiscal year ending in September is $76 billion, more than double the cost of four years ago.

Obama claims that unemployment is only 8.1%.  Conveniently, that leaves out all those who no longer look for work.  The real unemployment rate is closer to 22% or higher.

Progressives have overloaded the welfare system to the point of no return which is exactly what they wanted.  People want jobs and dignity.  They want to raise their families and have a good life and a prosperous future.  Slavery and poverty are not part of that equation and that is what unemployment and food stamps are.  Both have been pushed and implemented by Progressives.

When people get hungry, they get violent and riots ensue allowing the government to come in and forcefully subdue the masses.  Then they can institute the real “change”.  You see it throughout history.  This is what Progressives want – a “transformed” America that the elite control.

No jobs + no food = violence.    It is a fuse Socialist have been trying to light since Obama took office.

Are you really better off now than you were 4 years ago?

This is now personal for each and every one of us, whether you have a job or not.   November 6 is the most important day in our lifetime.  If Romney wins, things will improve, even though it will not be a walk in the park.  If Obama wins, it will be a stroll in hell.  The choice is yours!

← Chemtrails And Geo-engineering: What Are They Spraying?
Web Site Changes →