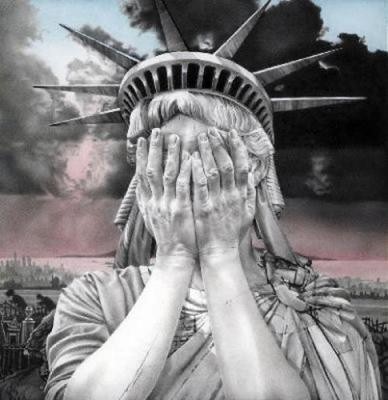 The Fifth Amendment to the Constitution states among other rights,  that a person may not be deprived of life, liberty, or property, without due process of law; nor shall private property be taken for public use, without just compensation.  Unfortunately, more and more states and localities are opting to take private property for what they deem to be the greater good (of their treasury).

Ordinarily, a government can exercise eminent domain only if it takes property for “public use” which is broadly defined along the lines of public safety, health, interest, or convenience  but, some governments have been inclined to exercise eminent domain for the benefit of developers or commercial interests on the basis that anything that increases the value of  land is sufficient for the “public use” definition.

A report, “Public Power, Private Gain” by Dana Berliner, an attorney at the Institute For Justice, was released in 2003 documenting government and business abuse of eminent domain laws.  In the report, Berliner discusses more than 10,000 cases where homes, businesses, churches and private lands were seized or threatened with seizure for private for-profit development.

Between 1998 and 2002  there were 10,282 plus evictions or threatened condemnations for private parties in 41 states.  States with the worst records include California, Kansas, Maryland, Michigan, Ohio, Pennsylvania, Florida and New Jersey.  Berliner said that the most common excuse for abusing eminent domain is for governments and developers to cite “community” betterment, a concept that doesn’t exist.  “Communities have no right (to execute private-use condemnations) – not under natural law, not under common law and not under the Constitution.”

The Castle Coalition released a paper in 2006 citing 20 failed projects involving eminent domain abuses.   “Building Empires, Destroying Homes“, a 2009 report from the Institute for Justice was released on eminent domain abuses just in New York.   The Law Firm of Waldo and Lyle wrote a paper on the  “Top Eminent Domain Abuses” in Virginia.

Virginia regularly uses eminent domain to transfer land to private developers and the threat of eminent domain to force people to sell.  Between 1998 and 2002, there were at least 58 condemnations for private parties (almost all for one project in Hampton),  and properties under threat of condemnation for other private parties.    As the former home of James Madison and Thomas Jefferson, one would think Virginia would have greater respect for private property rights guaranteed by the Founders in both the U.S. and Virginia Constitutions.

A perfect example of  Eminent Domain  abuse in Virginia  is the twelve year long fight Capital Radio Co. in Norfolk, Virginia has been waging to keep their 80 year old business from falling victim to economic development.

In the 2011 General Assembly,  Del. Johnny Joannou, D-Portsmouth introduced a bill to amend the Virginia Constitution .  The Amendment passed both houses in 2011, and both Houses in  2012.    The amendment, which has the support of Attorney General Ken Cuccinelli, reads:

“That the General Assembly shall not pass any law whereby private property, the right to which is fundamental, shall be taken or damaged except for public use, and only upon payment of just compensation to the owner thereof for the property taken or damaged and for damages to the residue caused by the taking.  No more private property may be taken than that which is necessary to achieve the stated public use.  Just compensation shall be no less than the value of the property taken or damaged, business goodwill, relocation expenses, loss of access and other economic loss proximately caused by the taking or damaging.  A taking or damaging of private property is not for public use if the primary use is for private gain, private benefit, private enterprise, increasing jobs, increasing tax revenue, or economic development, except for the authorized provision of a public service company, public service corporation, or railroad service or for the elimination of a  public nuisance existing on the property.  The condemnor bears the burden of proving that the use is public without a presumption that it is.”

On November 6, Virginia voters will be asked to vote on this amendment to Virginia’s Constitution.

Question 1 on the November ballot reads “Shall Section 11 of Article 1 (Bill of Rights) of the Constitution of Virginia be amended  (i) to require that eminent domain only be exercised where the property taken or damaged is for public use and, except for utilities or the elimination of a public nuisance not where the primary use is for private gain, private benefit, private increasing jobs, increasing tax revenue, or economic development; (ii) to define what is included in just compensation for such taking or damaging of property and (iii) to prohibit the taking or damaging of more private property than is necessary for the public use?”

While the amendment may not be perfect, it is the best hope Virginians have to protect their private property.  If passed, the law goes into effect on January 1, 2013 and will guarantee that:

THE AMENDMENT WILL  TIGHTEN THE STATE’S DEFINITION OF PUBLIC USE, WHICH AT THE MOMENT IS LEFT TO THE DISCRETION OF THE GENERAL ASSEMBLY and would ensure that your land can never be taken or given to another private landowner for development.

← Killed for Organs
Falling On Principle →