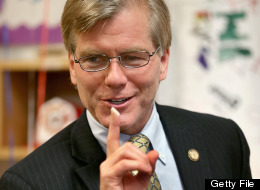 It was only a matter of time before the GOP would  once again throw in the towel and toss aside any pretense of standing up for  their supposed principles.  We’ve been through this numerous times through the backroom concession deals and false claims of budget cuts while raising the debt limit.

“The people have spoken, I think we’re going to have to be [flexible] now,” said Virginia Gov. Bob McDonnell, when asked if his party would now have to be open to taxes on the highest earners. “Elections do have consequences. The president campaigned on that.   Clearly, overwhelmingly people in America believe that raising rates on people that are in the upper income is part of the mix, the president is supporting that,  and I think the reality is something like that is going to be part of a final deal.”

McDonnell, the outgoing head of the Republican Governors Association, made clear that raising taxes isn’t his first choice. But he said that the political reality of a Democratic president and Democratic Senate makes it unlikely that a grand bargain can be struck without some compromise on raising revenues.

“As a piece of an overall package with tax reform that is more comprehensive, I think it’s something that absolutely has got to be discussed,” he said of tax hikes for the wealthy in an interview at the traditional post-election GOP governors’ conference here. “We’re in deep, deep trouble in America right now and I think with the president in power there’s no way to get a budget solution that’s spending cuts only.”

Former Mississippi Gov. Haley Barbour, one of the most influential Republicans in the country, echoed McDonnell’s assessment that Republicans should be open to upping the rates of the top filers in exchange for significant Democratic concessions on Social Security, Medicare and deficit reduction.  “If there’s enough savings, if there’s enough entitlement reform, if there’s enough certainty about tax reform in the next few years, I would,” Barbour said when asked whether his party should consider softening its opposition to letting the Bush tax cuts on the wealthiest expire.”

Idaho Governor Butch Otter is quoted as saying he has “already hear some of the Republican leadership talking about going to $500,000 or maybe $750,000, you know moving off the $250,000,”  alluding the prospect of raising the threshold for higher rates.

The National Federation of Independent Businesses, the S-Corporation Association and the U.S. Chamber of Commerce highly disapprove of raising taxes on the upper income, citing a studyof two Economists that tax increases on high income taxpayers will result in the loss of 700,000 jobs over the next decade.  Robert Frank at CNBC “Inside Wealth  said that  “The socio-economic “lynching” of the rich may force the rich to pull back – not just on luxury goods but also on broader consumption and services. In an economy where the wealthy account for an outsize share of activity, that could hurt the rest of us.”

I know this will surprise many people, but just because President Obama says  that he and his fellow rich haven’t been paying their “fair” share of taxes  doesn’t make it so.  Obama feels   it’s only “fair” to end the Bush tax cuts for unmarried individuals making more  than $200,000 a year and couples making more than $250,000 a year. Then he  increased taxes on those taxpayers (as well as those not so fortunate) to help  pay for Obamacare.  As long as “fair share” can be used to pit Americans against  each other and garner votes, the rich will never know what their “fair share” is  (which hardly seems fair).

If  Democrats  were truly interested in the upper-income class paying their fair share why is there close to $23 million owed in back taxes from federal employees?  ABC reported that 36 of Obama’s  aides owed $833,970.  There are 413 employees at the EPA who owe more than $19 million; and 185 at the FDIC that owe $3 million and even 5 that work at the U.S. Tax Court that owe close to $63,000.

Obama’s tax the rich scheme hardly seem fair to the individuals who will be unemployed  because  tax increases on the rich cause a loss of more than  700,000 jobs or to the employed whose wages will be almost 2% lower than they  otherwise would have been.

Politicians like McDonnell  with national ambitions should know that  raising taxes and spending, and talking like Democrats, is not the way to restore the Republican Party … Or to help the US economy.  But they fear that if they fall on their swords to stop a rate increase on the highest earners, it would only perpetuate that perception and give Democrats more fodder.   So, once again, its politics as usual.

Raising taxes on upper-income taxpayers  has nothing to do with closing our $16 TRILLION national debt.

Compromise is about mutual concessions which Obama won’t allow.  He has no intention of cutting a deal to reduce the deficit or reduce his outlandish spending agenda.

It’s about government control.  It’s about allowing politicians to look like they’re “doing something” while forcing YOU to pay for their unwillingness to restore government back to its limited role.