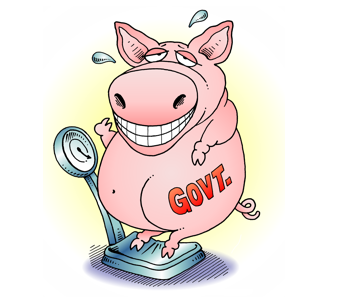 A report recently released by Citizens Against Government Waste gives Virginia a “D” for its large gap between state and private sector compensation.

The study for CAGW by John Dunham & Associates, a New York-based economic research firm, analyzed state government wages and benefits in all 50 states comparing public to private employees in 22 occupational categories provided by the Bureau of Labor Statistics.

According to the study, no state government pays its employees at or below private sector wages. Texas has the largest difference between public and private sector pay, researchers found, while Utah and Montana have the smallest disparities.

There are job categories, such as managers, computer scientists, and lawyers, in which private-sector people in Virginia and elsewhere do much better, on average, than those working for the state government. But when it comes to many of the more common occupations, in which exceptionally high “star” salaries aren’t really available, states are substantially more generous to their employees than the private sector.

For instance, in Virginia, building and grounds maintenance workers earn $17.56 an hour if they work for the state, compared with $14.07 in the private economy. The state’s office and administrative support employees earn $23.55 versus $20.35 for their private-sector counterparts. Health-care support workers make $23.97 if they work for the state and a much lower $15.90 if they’re privately employed. In community and social service work, the compensation is $30.96 versus $24.49.  State employees in “construction and extraction” earn $27.47 as opposed to $24.84.  And while the difference may seem small, it adds up.

Virginia ranks a remarkably high fourth among the 50 states in the size of its public-private gap. Its “D” grade (which is based on a similar but slightly different criterion) puts it in company with states like Illinois, Massachusetts, Michigan, and New Jersey.  In addition, at least two states with more liberal politics and policy than Virginia, notably Vermont and Rhode Island, actually earned an “A.” According to the Dunham & Associates study, among the several “F” states, the two where public compensation most exceeds that in the private sector are—no surprise—California and, more surprisingly, Texas.

“The disproportionate public sector compensation is a major driver of unfunded state and municipal pension liabilities across the country, which has been accurately described as looming financial crises by pundits and experts of all political stripes,” according to Citizens Against Government Waste president Thomas Schatz.  “Without real changes to the existing system, entire states may find themselves insolvent.”  According to a 2012 report (page 6) Virginia ‘s Public Pension unfunded liability is $53.8 billion.

Most of us in the private sector depend on 401(k) plans, IRAs and similar arrangements to fund our retirements.  Such plans are largely self-funded and self-directed.  If we invest poorly, we are responsible. If we make smart decisions, we reap the rewards.

Unfortunately, states don’t earn money, anymore than the federal government does, so promises for wages and benefits the  legislature promises public sector employees becomes a liability of the private sector.  State’s can’t print fiat money like Bernanke so they  turn to taxpayers to foot these inflated benefits  and wages, either through increased taxes or the reduction of services.

Politicians should not be asking hardworking taxpayers in the private sector to pay more for  benefits of their better compensated public sector counterparts while making devastating cuts to the essential services in an attempt to balance their budget.

← Overthrowing America
Who is ALLAH ? →