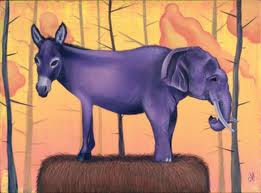 The GOP machine has become a bunch of liberal Democrats whose only care is to retain their power.    If this were not the case, they would have pulled out all the stops and fought Democrats’ excessive spending over the last four years.

After Reagan left office, the GOP establishment crumbled, hurling  conservatism over a cliff.  In fact,  GOP leadership has become so liberally Democrat, it looks like the Democrat Party’s behind.

The Republican  leaders of the House are nothing more than  fence-straddling Democrats who sticks their cigarettes in the wind to see which way the wind blows the smoke so they can decide which deal will keep them in power?   Maybe it’s time conservatives think about pushing this GOP machine over the same cliff they are helping Democrats hurl America over.

Boehner’s latest sacrifice at the Obama appeasement alter –  for refusing to sell out their constituents,  for refusing to cave to Boehner’s agenda –  are Conservative Reps Tim Huelskamp of Kansas and Michigan’s Justin Amash  who are losing their seats on the House Budget Committee chaired by Rep. Paul Ryan, and  Reps. Walter Jones of North Carolina and David Schweikert of Arizona who are losing their seats on the House Financial Services Committee.  Who will Boehner sacrifice next?  Well, according to Michael Steele, Boehner’s spokesman,  ‘the Steering Committee (controlled by Boehner) makes decisions based on a range of factors,’  – or ones grounded in a purge list.”

Rep. Huelskamp summed it up nicely when he said “I think it’s the worst form of petty, vindictive politics that a member is removed from a committee when he votes his conscience and he votes his district… but these People go behind closed doors. They [the GOP Establishment] don’t talk to your constituents. They don’t care about your constituents. All they care about is raw political power.”

According to Heulskamp  “We’ve heard from multiple sources that someone walked in with a list of votes and said if you didn’t reach a particular scorecard of what was considered the right vote – which by the way, in most cases, was not the conservative position – then [they said] ‘we’re going to have to remove you from the committee.  All that took place behind closed doors, which is again a problem with Washington, D.C. – whether it’s the budget negotiations, whether it’s everything else, it’s usually done behind closed doors. I think, as conservatives, this is where we can win:  We’ve got to be willing and able to talk about things in public instead of being afraid of actual public scrutiny.”

RINOs must go!  Their preference to hang on to power at all cost by making deals with Obama that increases our  debt, by throwing Conservative members to the wolves,  and  their willingness to raise taxes by $800 billion –  tax increases disguised as getting even with the rich,  that will hike taxes on the Middle Class,  should send a clear signal to all Conservatives that it is time to purge the Republican leadership in the House.

It’s time to elect authentic fiscal Conservatives to the House in the 2014 mid-term elections because if we don’t,  Nancy Pelosi will ride back in on her broom and her Flying Monkeys will once again have full control.

America  desperately needs leadership  willing to fight against this  unconstitutional administrative government,  willing to stand up to Barack Obama and shove his Marxist “spread the wealth,” “fair share” policies back in his face.    All  we have now are a bunch of RINOs willing to  hand America over to Democrat Trotsyites hell-bent on removing traditional conservative founding values, morals, independence, liberty, constitutional rights, while hurling America over the economic fiscal cliff we cannot climb up and out of.

All Conservatives need to  contact our weepy eyed  Majority Leader at 202-225-6205 and let him know that his war against conservatives and the tea party is not playing well with everyday Republicans, nor will we stand for him caving once again to Obama’s  outrageous demands.

“I place economy among the first and most important Repubican virtues and pubic debt as the greatest of dangers to be found.  To preserve our independence, we must not let our rulers load us with perpetual debt. . .I am for government rigorously frugal and simple.”  Thomas Jefferosn