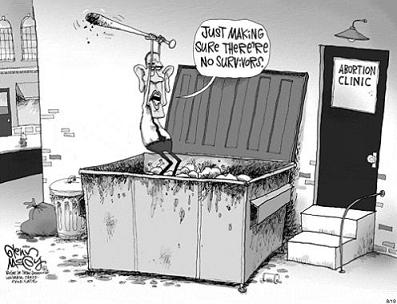 Philosophy, ideology, campaign tools, liberal hypocrisy, lies and politics hardly seem a fair price for the blood of the innocents.

They tell us they want to institute gun control for the children, to keep the children safe – because they are so concerned about the welfare of  children.  Right!

NY Governor Andrew Cuomo, as an example of liberal hypocrisy at its best,  is  aggressively pushing for a bill to legalize late-term abortions in New York.  Not only would it be legal to tear an unborn child limb from limb but it would be permissible for non-doctors (anyone) to murder this child.

Murder for Convenience is as disgusting as those who call themselves “healthcare” providers.

There are two types of procedures used for late term abortions.   In one, the doctor or practitioner  inserts a long toothed clamp through the woman’s vagina into the uterus. She/he grabs body parts of the fetus at random, breaks them from the body and pulls them out. Finally, the head is crushed and extracted. Finally, the placenta and any remaining parts of the  fetus are suctioned from the uterus.

In the second,  the woman’s cervix is dilated. If necessary, the fetus is rotated until it is facing feet downwards. The surgeon reaches into the uterus and pulls the fetus’ body, with the exception of its head, out of the woman’s body. Surgical scissors are inserted into the base of the fetal skull, and withdrawn. A suction tube is inserted and the fetus’ brains are removed through aspiration. This partially collapses the fetal skull. The fetus is then fully removed.

Cuomo just recently pushed through some of the most aggressive anti-gun rights legislation in the entire country, supposedly for the children.   Cuomo, an conscionable  scumbag declared while promoting his gun policies:

“This is a scourge on society” (referring to the Newton, Conn. shooting).  “At what point do you say, ‘No more innocent loss of life.”

I’d like an answer to that myself.   But to the liberal mindset promoting the mass murder of unborn babies is the right thing to do, just as denying the 2nd Amendment rights of law abiding citizens.   They live in self imposed moral blindness.

Our so-called Christian president voted three times , while a State Senator in Illinois,  against the “Born Alive Infants Protection Act.”   In live-birth abortions, children who survive an abortion are left to die.   Obama claimed he voted against it because it did not include the federal neutrality clause, which declared that the bill  did not protect a baby in utero.  As part of the legislative committee that added the federal neutrality clause to the legislation, Obama lied through his teeth.

These shameless liberals  openly oppose capital punishment because it is “cruel and unusual;”  they oppose the 2nd Amendment because they claim guns go out and randomly shoot innocent children; but they joyously  support the murder of 3000 plus babies every day hiding behind a woman’s right to choose.  For me, a woman’s right to choose is to say no or at least practice safe sex.

Liberalism is a disease and liberals are the epitome of hypocrisy.