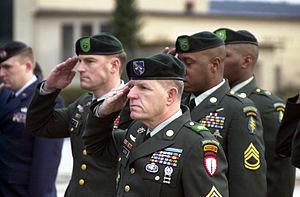 More than 1,100 retired and current Army Special Forces troops, Green Berets,  have put their names to a letter that condemns the efforts by Washington  politicians to restrict in any manner gun ownership, following the massacre at  Sandy Hook Elementary School.

We are current or former Army Reserve, National Guard, and active duty US Army  Special Forces soldiers (Green Berets).  We have all taken an oath to “…support and defend the Constitution of the United States against all enemies foreign and  domestic; that I will bear true faith and allegiance to the same.…”

The Constitution of the United States is without a doubt the single greatest document in the history of mankind, codifying the fundamental principle of governmental power and authority being derived from and granted through the consent of the governed. Our Constitution established a system of governance that preserves, protects, and holds sacrosanct the individual rights and primacy of the governed as well as providing for the explicit protection of the governed from governmental tyranny and/or oppression. We have witnessed the insidious and iniquitous effects of tyranny and oppression on people all over the world.  We and our forebears have embodied and personified our organizational motto, De Oppresso Liber [To Free the Oppressed], for more than a half century as we have fought, shed blood,  and died in the pursuit of freedom for the oppressed.

Like you, we are also loving and caring fathers and grandfathers.  Like you, we have been stunned, horrified, and angered by the tragedies of Columbine, Virginia Tech, Aurora, Fort Hood, and Sandy Hook; and like you, we are searching for solutions to the problem of gun-related crimes in our society.  Many of us are educators in our second careers and have a special interest to find a solution to this problem.  However, unlike much of the current vox populi reactions to this tragedy, we offer a different perspective.

“Prior to 1989, the term assault weapon  did not exist in the lexicon of firearms. It is a political term [underline added for emphasis], developed by anti-gun publicists to expand the category of assault rifles.

The M4A1 carbine is a U.S. military service rifle – it is an assault rifle. The AR-15 is not an assault rifle. The “AR” in its name does not stand for “Assault Rifle” – it is the designation from the first two letters of the manufacturer‟s name – ArmaLite Corporation. The AR-15 is designed so that it cosmetically looks like the M4A1 carbine assault rifle, but it is impossible to configure the AR-15 to be a fully automatic assault rifle. It is a single shot semi-automatic rifle that can fire between 45 and 60 rounds per minute depending on the skill of the operator.

In 1986, the federal government banned the import or manufacture of new fully automatic firearms for sale to civilians.   Therefore, the sale of assault rifles are already banned or heavily restricted.

The second part of the current debate is over “high capacity magazines” capable of holding more than 10 rounds in the magazine. As experts in military weapons of all types, it is our considered opinion that reducing magazine capacity from 30 rounds to 10 rounds will only require an additional 6 -8 seconds to change two empty 10 round magazines with full magazines. Would an increase of 6 –8 seconds make any real difference to the outcome in a mass shooting incident?

Now that we have those facts straight, in our opinion, it is too easy to conclude that the problem is guns and that the solution to the problem is more and stricter gun control laws.  For politicians, it is politically expedient to take that position and pass more gun control laws and then claim to constituents that they have done the right thing in the interest of protecting our children. Who can argue with that?  Of course we all want to find a solution. But, is the problem really guns?  Would increasing gun regulation solve the problem? Did we outlaw cars to combat drunk driving?

Despite the absence of a “gun culture”,  Great Britain, with one-fifth the population of the U.S., has experienced mass shootings that are eerily similar to those we have experienced in recent years.  In 1987 a lone gunman killed 18 people in Hungerford. What followed was the Firearms Act of 1988 making registration mandatory and banning semi-automatic guns and pump-action shotguns.  Despite this ban, on March 13, 1996 a disturbed 43-year old former scout leader, Thomas Hamilton, murdered 16 school children aged five and six and a teacher at a primary school in Dunblane, Scotland.

Within a year and a half the Firearms Act was amended to ban all private ownership of hand  guns. After both shootings there were amnesty periods resulting in the surrender of thousands of firearms and ammunition. Despite having the toughest gun control laws in the world, gun related crimes increased in 2003 by 35% over the previous year with firearms used in 9,974 recorded crimes in the preceding 12 months. Gun related homicides were up 32% over the same period. Overall, gun related crime had increased 65% since the Dunblane massacre and implementation of the toughest gun control laws in the developed world.

Throughout history, disarming the populace has always preceded tyrants‟ accession of power.  Hitler, Stalin, and Mao all disarmed their citizens prior to installing their murderous regimes. At the beginning of our own nation‟s revolution, one of the first moves made by the British government was an attempt to disarm our citizens.   When our Founding Fathers ensured that the 2nd Amendment was made a part of our Constitution, they were not just wasting ink. They were acting to ensure our present security was never forcibly endangered by tyrants, foreign or domestic.

If there is a staggering legal precedent to protect our 2nd Amendment right to keep and bear arms and if stricter gun control laws are not likely to reduce gun related crime, why are we having this debate?  Other than making us and our elected representatives feel better because we think that we are doing something to protect our children, these actions will have no effect and will only provide us with a false sense of security.

It is important that we recognize that this is not a gun control problem;  it is a complex sociological problem. No single course of action will solve the problem.   It is our recommendation that a series of diverse steps be undertaken, the implementation of which will require patience and diligence to realize an effect.

This is our country, these are our rights. We believe that it is time that we take personal responsibility for our choices and actions rather than abdicate that responsibility to someone else under the illusion that we have done something that will make us all safer.  We have a responsibility to stand by our principles and act in accordance with them. Our children are watching and they will follow the example we set.

You can read the letter in PDF in its entirety at this link.

← Alternative Currency Plan Moves Forward in Virginia
According to the IRS The Cheapest Obamacare Plan Will Be $20,000 Per Family →