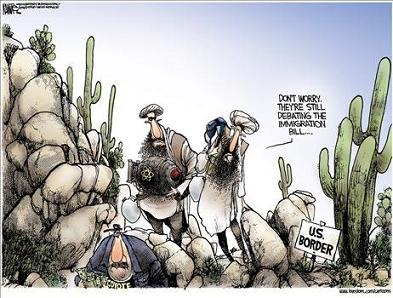 As the Federal government spends billions of dollars to expand the surveillance and monitoring of U.S. citizens with electronic eavesdropping devices and drone aircraft, Obama  has decided to shut down a surveillance system that not only protects our southern border and coastline against low-flying aircraft and missiles but  also assists U.S. Customs and Border Protection in interdicting illegal border crossings and smuggling.

The Tethered Aerostat Radar System (TARS)  uses moored balloons hovering at about 15,000 feet to watch for incoming aircraft and missiles that may penetrate U.S. air space.    NORAD, the U.S. Air Force and customs all rely on the system, that is until March 15 at which time TARS will no longer exist.

The  system is capable of detecting low altitude aircraft at the radar’s maximum range by mitigating curvature of the earth and terrain masking limitations.   TARS provides a detection and monitoring capability along the United States-Mexico border, the Florida Straits, and a portion of the Caribbean in support of the Department of Defense Counterdrug Program… In addition to its counterdrug mission, TARS surveillance data also supports North American Aerospace Defense Command’s air sovereignty mission for the continental United States.  But, on March 15, America’s southern border will be

Not only will its  closure mean hundreds of people will be out of jobs,   it also means that our borders will not be safe, especially along the remote U.S. Mexico Border like in Texas.   These defense radars detect low flying aircraft infiltrating our borders and without  these defense radars, low flying aircraft will go undetected.   It will be open season for any drug/gun/slave smugglers, terrorists flying in with nukes, low altitude missiles, or even a full scale low elevation invasion/attack against America.”