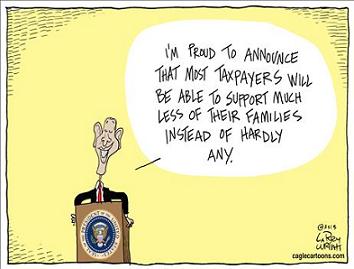 1.65 million jobs are forecasted to be lost due to new and pending EPA regulations that Obama put on the shelf until after the elections.  823,000 construction jobs and 606,000 manufacturing jobs have been lost since Obama took office.  23,000 jobs were lost due to Obama’s moratorium on drilling.

ObamaCare contains $835.8 Billion new taxes, and $716 Billion in cuts to Medicare.  The average health insurance premium for a family of 4 is projected to cost $15,745 a year.  The total cost of Obamacare, once fully implemented, is projected to cost taxpayers $2.6 Trillion.  And, 7 million Americans will lose their heath insurance coverage in 2014.

There has been $518 Billion of new Regulatory burden placed on businesses since Obama took office, $236.7 Billion  just in 2012.  These figures do not include the new and pending EPA regulations yet to be put into effect.

Obama’s first stimulus plus interest on the borrowed funds cost taxpayers $1.18 Trillion.    Taxpayers are still owed $28.5 Billion for bailout of the Auto Industry and government expects to lose $24.3 Billion of that.

There has been 5.9 Trillion added to the debt since Obama took office.  Our current national debt stands at $16.5 Trillion and is projected to be $25.4 Trillion by 2022.

Obama’s proposed 2013 budget includes $487 Billion in cuts to our National Defense over the next ten years.

If you have the heart, you can read the rest of the numbers at this link.