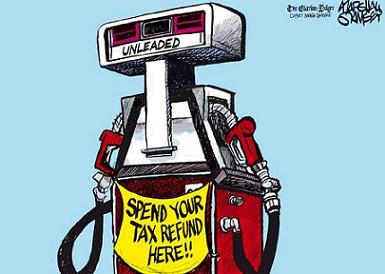 Right now, the biggest driver of oil prices, or the biggest supporter of ‘high oil prices,’ is not OPEC but it’s really the Federal Reserve, with their policy   of really keeping the value or the cost of money artificially low; and that is keeping the dollar artificially cheap,”  says Steven Schork,  editor of The Schork Report, a subscription service providing technical and fundamental daily views of the energy cash and derivatives markets.

“There is a historic inverse relationship between oil prices and the value of  the U.S. dollar because oil prices are valued in the U.S. dollar.  “So by keeping the dollar cheap relative to other currencies, you’re certainly giving a driver, a support mechanism for higher oil prices. That makes oil,  which is priced in dollars, cheaper in foreign currencies.”

Schork sees oil prices between $85 and $95 a barrel this year. On the New York  Mercantile Exchange Friday, crude oil for March delivery slipped 11 cents to
settle at $95.72 a barrel.  “That is indeed a comfortable level in an economy here in the United States that is growing . But that brings us to the important question: Can the consumer afford these prices, given  where they stand right now from a macro-economic standpoint?”

One way to reduce high U.S. energy prices and market volatility, Schork says,  would be if President Barack Obama approves the extension of the Keystone
pipeline, which would enable the transport of cheap crude produced in North Dakota, Montana, and Canada.   The pipeline now runs from Canada to the
Midwest. An extension could bring it as far south as the Texas Gulf  Coast.

Completion of the Keystone extension, he says, would calm volatile and uneven gasoline prices significantly. “So instead of these spikes to $4.50
or $5 that we’ve been seeing in certain market areas, certainly out on the West Coast, increased access to this oil will help soothe that, and we wouldn’t see
these huge disparities in regional gasoline pricing.”  FAT CHANCE OF THAT HAPPENING!

Although, it has been suggested that  Obama might offer some kind of carbon tax as a carrot to environmentalists and climate activists opposed to Keystone has since emerged as more than plausible.   Wall Street Journal columnist Kimberley Strassel recently outlined how the president might demand a carbon tax in return for approval of energy projects, including Keystone.   Getting a carbon tax through Congress looks tricky, but  Strassel reported that California Senator Barbara Boxer outlined how a carbon tax could be imposed administratively through the Environmental Protection Agency.

The Keystone-carbon tax trade off was also suggested in a recent editorial in Nature, the science journal. The editorial was big news in Canada, thanks to its endorsement of Keystone and Canada’s oil sands. “Regarding the Keystone pipeline,” said Nature, “the administration should face down critics of the project, ensure environmental standards are met and then approve it.” The science writers at Nature also benevolently said Canada’s oil sands are “not as dirty as many believe.”

Soaring gas prices continue to hurt American families after a year of especially high fuel costs, not that Obama cares.  According to recently released data from the Department of Energy, U.S. households spent an average of $2,912  or nearly 4 percent of their income  on gasoline in 2012.  The burden on budgets was the worst in three decades  rivaled only by similarly high costs in 2008.  And, if Congress does approve a carbon tax expect not only gasoline to soar but food and utilities prices will soar  out of the realm of most Americans.

Persistently steep gas prices and their harmful impact only  underscores a need for better energy policies.  Instead of pursuing an “all-of-the-above” approach (green), the Obama Administration has consistently faltered on the economy and America’s energy security AND NOWHERE  is this more evident than the President’s decision to punt on the Keystone XL pipeline.

The long delayed  pipeline would provide an abundant and reliable energy supply to U.S. refineries, spur major economic development along with creating about  20,000 American good paying jobs that are desperately needed, all  without costing the taxpayers one dime, which is something that we can’t say about Obama’s “green” agenda.

But Obama continues to play politics, once again trying to  sideline the project, according to recent news reports, pushing a decision about Keystone XL to at least June, despite the project’s widespread support and potential to put Americans to work right away.

As The Washington Post editorial board wrote on January 23, “The president has even less reason to nix the project than he did last time.”  Keystone XL has already undergone the most extensive environmental evaluation of any U.S. pipeline.   The question of whether to move forward on this ready infrastructure project should not be in dispute.

Don’t be fooled by The U.S. Department of the Interior announcement that the upcoming Central Gulf of Mexico Lease Sale 227 will offer 38.6 million acres offshore Louisiana, Mississippi and Alabama for oil and gas exploration and development.  Unfortunately, this does not mean any new drilling will occur.

Lease sales just like this one have occurred nearly every single year since the current area-wide leasing scheme was put in place by President Reagan’s Interior Secretary, James Watt, in 1982. (I say “nearly” because the Obama Administration cancelled regularly-scheduled offshore lease sales in a regulatory overreaction to the BP oil spill in 2010.)

That means that virtually every single acre of the 38.6 million offered has been available before.  Some of them have been available every year for 30 years and have never received a bid.

Other blocks have been leased before, but never drilled. The leases expired after their “primary term” of five to ten years.