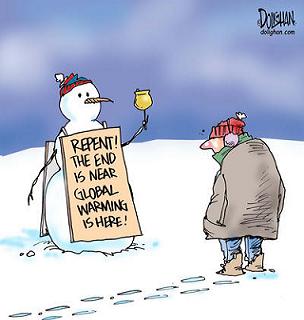 Contrary to the lessons of history, President Obama seems to believe that there is nothing that cannot be improved through the magic of higher taxes.   But taxes to control the weather?

Average planetary temperatures haven’t budged in 16 years. Hurricanes and strong tornadoes are at or near their lowest ebb in decades. Global sea ice is back to normal, Arctic ice is nearly normal, and the Antarctic icepack continues to grow. The rate of sea level rise remains what it was in 1900.

And yet, President Obama and many politicians, newscasters and alarmist scientists continue to insist that carbon dioxide emissions are changing Earth’s climate, and we need to take immediate action to prevent storms like Hurricane Sandy and avert catastrophes predicted by IPCC computer models and alleged “scientific consensus.” Not surprisingly, polls show public support for controlling CO2 output and taxing hydrocarbon use – to “ensure climate security” and “save vital federal programs” from budgetary axes.

Employing Energy Information Administration data, a recent Heritage Foundation study by economists David Kreutzer and Nicolas Loris found that a tax starting at $25-per-ton of CO2 emitted and increasing by 5% per year would cut a family of four’s income by $1,400 annually, raise their utility bills by $500 a year, and increase gasoline fill-ups by up to 50 cents per gallon. That’s $2,000 a year chopped from their budget for food, vacations, home and car payments and repairs, college and retirement savings, dental and medical care, and overall quality of life.

Even “millionaire” families making $200,000 a year would find such a hit painful. While the poorest families might get some offsetting tax relief, most would get nothing – nor would employers.

Carbon taxes would thus increase the likelihood that many breadwinners will end up unemployed, since the tax would raise business energy costs dramatically, force companies to trim hours and/or employees, and result in an aggregate loss of at least 1 million jobs by 2016, Heritage notes. That would bring more home foreclosures, greater stress, reduced nutrition, and more strokes and heart attacks, especially for older workers whose odds of finding new employment are increasingly bleak.

No small businesses or energy-intensive manufacturing companies would get a rebate for their soaring carbon taxes. Nor would any mall, hospital, school, church, synagogue or charity group.

Hydrocarbons provide over 83% of all the energy that powers America. A carbon tax would put a hefty surcharge on everything we make, grow, ship, eat and do.   It would put the federal government in control of, not just one-sixth of our economy as under Obamacare, but 100% of our economy and lives.   It would make the United States increasingly less productive, less competitive globally, less able to provide opportunities for our children

But it gets worse, because this tax on America’s energy and productivity is not being promoted in a vacuum. It would be imposed on top of countless other job and economy strangling actions.

President Obama’s Environmental Protection Agency has already issued 2,071 new rules and dispensed a regulatory burden of over $353 billion per year – equal to all wealth generated annually by Virginia’s private sector. It is now preparing still more rules, the most crushing of which would regulate the same CO2 emissions that some in Congress want to tax, from both moving and stationary sources. Most, if not all of its punitive rules, are based on exaggerated risks, fear mongering, junk science, and illusory health, welfare, “environmental justice” and “sustainability” benefits.

Other agencies are inflicting still more rules, and more crushing paperwork burdens. Obamacare alone will add 127,602,371 more hours per year to the federal paperwork burden for American businesses and families. That’s enough time to carve 1,039 Mount Rushmore monuments, says the Washington Examiner. Even at $25 per hour, that’s $32 billion a year. On top of that, there are the Dodd-Frank financial requirements and myriad other costly, time-consuming, economy-sapping, job-killing rules.

Instead of real energy for real jobs and revenues, President Obama wants to redouble spending on “green” energy – extracting billions of dollars from still productive sectors of our economy, and transferring the money to crony corporatists and campaign contributors, whose operations are exempted from endangered species and other laws that are imposed routinely and punitively on oil, mining and other companies.

You can read the rest of Paul Driesson’s article  Caron Tax Hallucinations on cFacts at this link.

If you haven’t figured it out yet, this climate change, global warming hoax is just another name for Agenda 21, that U.N. scam to control not only our lives but our money.   As Agenda 21 has been enforced in more and more policy, the perpetrators have grown more bold in openly revealing the truth – it really is a not-so disguised Marxism.   Let the enviro Nazis them tell you in their own words.

We must make this an insecure and inhospitable place for capitalists and their projects.”  Dave Foreman (Co-founder of Earth First)

“If we don’t overthrown capitalism, we don’t have a chance of saving the world ecologically. I think it is possible to have an ecology sound society under socialism. I don’t think it’s possible under capitalism.”   Judi Bari (Earth First)

“The only hope for the world is to make sure there is not another United States. We can’t let other countries have the same number of cars, the amount of industrialization we have in the US. We have to stop these Third World countries right where they are.” Michael Oppenheimer (Environmental Defense Fund)

“Individual rights will have to take a back seat to the collective.” Harvey Ruvin (Vice Chairman, ICLEI)

Only socialism and the global solidarity of all working peoples can free both humanity and the earth from the fatal threat of global capitalism.” T   hird Annual Conference of the World Association from Political Economy) Langfang, China, May 23 – 25 – 2008

“What is occurring here, not just in Doha, but in the whole climate change process, is the complete transformation of the economic structure of the world.”   Christiana Figueres (Executive Secretary, UN Framework Convention on Climate Change, November, 2012)

Marxism is all the rage in the international circles, but local proponents, planning groups, planning departments and elected officials deny any such connections to their planning programs.  Is there one?  Let’s let an avowed Marxist author Ted Trainer explain how and why to impose the local process as he described it in his book, “Transition to a Sustainable and Just World.” See if you don’t recognize some of your community’s local planning programs.

“The global economy is massively unjust. It delivers most of the world’s resources to the few in rich countries, and gears Third World productive capacity to rich world super-markets, not to meeting the needs of the world’s poor billions. Rich countries must move down to living on their fair share of global wealth. . .”

“These faults cannot be fixed within or by a society driven by growth, market forces, production for profit, or affluence. These are the causes of the global sustainability and justice problems. Consumer society cannot be reformed to make it sustainable or just; it must be largely replaced by a society with fundamentally different structures. Local planning focuses on curtailing energy and natural resource and land use.”

“The alternative has to be THE SIMPLER WAY, a society based on non-affluent lifestyles within mostly small and highly self-sufficient local economies under local participatory control and not driven by market forces or the profit motive, and with no economic growth.

The Ubber left rich folks like Turner, Gates, Gore,  the Rockefellers, etc. are all for the “peasants” returning to the dark ages but I have not seen one willing to give up all that money they amassed through our  “horrid” capitalist system and live like regular people.  And you know what – you never will cause they are earning even more on the backs of the “peasants” who are gullible enough to swallow their “sky is falling” scam.