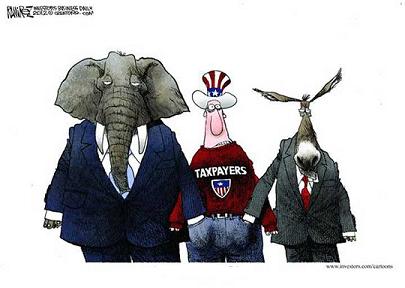 With no advanced notice to the people of Cyprus, over the weekend, Euro zone finance ministers demanded  that Cypriots pay a tax on  their bank deposits in exchange for a €10bn (£8.5bn) bailout, prompting panic across the island  as people rushed to cash machines to withdraw their savings only to discover that the taxed portion of their savings was frozen, even before parliamentary approval.

The new savings tax  caused traders to dump shares across Europe  fearing they would be next.  And despite assurances from European officials that Cyprus was an exception, El-Erian said the Cyprus bailout has driven investors to demand higher returns to hold risky assets.   On the stock market, the FTSE 100 fell 100 points but by lunchtime had recovered to 6,448, a fall of 40 points or 0.65%.   The euro slid to $1.2888 in early trade, its lowest point since December as gold rose above $1,600 for the first time in more than two weeks.

The widespread anxiety drove up German government bonds, the traditional favorite of risk-adverse European investors, and indiscriminately pushed up the cost of insuring against a sovereign default in the euro zone’s southern rim.

In true  Socialist style, Cypriot president, Nicolas Anastasiades,  urged politicians to back the tax, saying it was essential to prevent the country  from falling into bankruptcy.   He said: “I chose the least painful option, and I bear the political cost for this, in order to limit as much as possible the consequences for the economy and for our fellow Cypriots.”

Apparently having to pay double taxation for the money they earn and then having a portion of their life savings stolen is not a hardship and of  little  consequences to those EU socialist in power.  The so-called “wealth tax”  hit poor and rich alike.

To prevent a further run on the banks, the government extended a bank holiday it had imposed over the weekend, meaning banks will not open Tuesday as planned. There was talk that they might not open Wednesday, either.

Mohamed El-Erian, the chief executive of Pimco, the world’s largest bond investor, said: “In Europe  bailout  could well undermine the recent tranquil behaviour of depositors and creditors in other vulnerable European economies – in particular Greece, Italy, Portugal and Spain.”

Lars Seier Christensen, chief executive of the Danish investment bank Saxo, said: “I believe it could be the beginning of the end for the eurozone as this is an unbelievable blow to the already challenged trust that might be left among investors.”

If I lived in Spain or Italy or Greece, I think I would seriously consider removing my money from the banks.  Already panic is beginning to spread throughout the Euro zone as people talk of the possibility that Cyprus was only a test case to see if they could get away with the theft.

“They are trying to make an experiment with a small country,” said Stefan Kourbelis, a manager at the Centrum Hotel in Nicosia’s main square, echoing a widely held view. “If it works, the next one could be Spain, Italy and others. If things go badly, they can just say, who cares about Cyprus?”

Could it happen in the U.S.?  Why not, Obama needs money to further his destruction of the country.

There is already talk of taking over our private retirement accounts cause everyone knows government would do a much better job of managing it for us.  Look at how well they have handled Medicare and Social Security!   Taxing our personal savings would require what?  An executor order?