The number one goal for fiscal policy is to reduce the burden of government spending.  A simple way to achieve this goal is to make certain that the private sector grows faster than the public sector.  But when politicans fail to exercise that modest amount of fiscal restraint – bad things happen.

Consider  Virginia  which is largely controlled by Republicans.  Except, in this case,  party labels apparently don’t mean much because state spending has been growing at twice the rate of inflation. 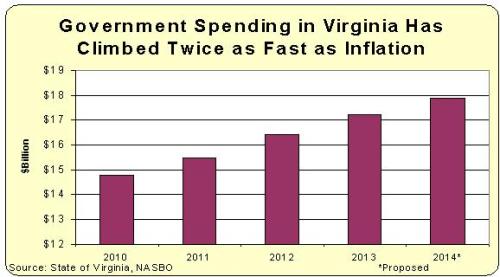 Per the Wall Street Journal  “There’s one thing uglier than a Democratic tax-and-spend spree. A Republican one. . . Virginia Governor Bob McDonnell and a GOP-run legislature approved a five-year, $6 billion transportation bill financed almost entirely with higher sales and car taxes.   McDonnell even cut an 11th-hour deal with Democrats over the expansion of Medicaid under ObamaCare. …Mr. McDonnell says the commission means Virginia won’t expand Medicaid as long as Republicans control the legislature, but wait until the hospital lobby gets done working the same Republicans who raised taxes.”

Thanks to McDonnell and his merry band of RINOs, while  doubtlessly mading  lots of friends with the interest groups that dominate Richmond and securing future help with McDonnell’s  political goals,  Virginia taxpayers won’t be so lucky.   Despite what you’ve heard, these taxes are not dedicated to transportation, which is the excuse some are giving for this massive tax hike!   It’s just a new slush fund for growing government!

McDonnell and his band of merry RINOs not only left  the GOP divided and conservatives dispirited, but  the November races in question.  No wonder Democratic nominee for Governor Terry McAuliffe endorsed the bill.  He knew it would erase any GOP advantage.

Ken  Cuccinelli, the likely Republican nominee for Governor  opposed the bill, telling legislators the law was in violation of  Virginia’s constitution, but to no avail.   Once again the GOP elite and special interest won.  Irregardless of taxpayer backlash, McDonnell is still planning to sign the bill into law.    Please email him and express your outrage at HB 2313.

If nothing else, McDonnell’s actions proves that a person’s true colors will always show within time.

← Obama Looks an awlful lot like Satan in the “Bible” mini series – Who Knew?
Come Into My Parlor Said The Spider to The Fly! →