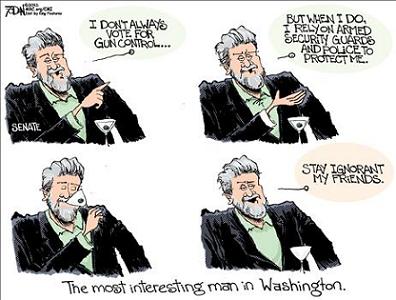 Did you realize that over 90% of the guns in this country are owned by angry racist white people who live in the suburbs and rural areas?  Ask Michael Moore – he knows!   He just can’t figure out why we have them or who we are afraid of.

Did you know that anyone “who would run out to buy an assault rifle after the Newtown  massacre has very little left in their body or soul worth protecting,” says   Jim  Carrey on Twitter, Feb. 2.  Carrey has also come out with his own song  which he uses to  mock Charlton Heston in particular and gun owners in general that he loving calls  “Cold Dead Hands”  which he says is about heartless motherf*ckers.

Mayor Nanny Bloomberg has just launched  a $12 million ad blitz targeting senators that he sees as  wavering on gun control.  “I have a responsibility … to try to make this country safer”  by regulating what people drink or smoke, unless  it is  marijuana.    “I do think there are certain times we should infringe on your freedom,” Bloomberg said, during an appearance on NBC.   ‘Nanny knows best,’  and  Americans should just shut up and cede their rights.

So far Plan B looks like Plan A doesn’t it?

The “Plan B” alternative has been adjusted since an out-and-out gun ban proved to be an impossibility.  Plan B has  three components: Fictitious “gun trafficking” legislation, so-called “mental health screenings” and “expanded background checks.”   And all are equally dangerous,  sound benign and are designed with one goal in mind: a national gun registration data base for future gun confiscation.

There are currently over  3,000 gun laws on  the state,  local  and federal books.   None of these laws have stopped criminals from obtaining illegal firearms and no law ever will.  They don’t call them criminals because they obey the law.

S 150, Senator Diane “Arms For Me But Not For Thee” Feinstein’s contribution to the gun grab  was  aimed at innocent people who haven’t  committed any crime.     It was the worst kind of bureaucratic and government abuse – crime by decree.   It was obvious to anyone that read the bill that it wasn’t about controlling guns – it was about controlling people.   As it stands at this moment, her gun grab  bill will not come to the floor for a vote but something tells me it will more than likely be added as an amendment to any other piece of Socialist gun ban legislation that hits the Senate floor.

S443, aka the The Leahy-Gillibrand-Kirk legislation  introduced on March 4  has the innocent title of  “Stop Illegal Trafficking in Firearms Act of 2013.”     Sounds like a good idea, who wouldn’t want to stop illegal trafficking even by the BATF.   Unfortunately,  under section 4,  if you even “intend” to sell a firearm to a person who turns out to be a marijuana smoker — or one of the prohibited military veterans suffering from PTSD — you become one of those  “prohibited” people  yourself.   You don’t need to know the person is  prohibited from owning firearms and the recipient doesn’t need to know they’re a prohibited person nor do they have to be on the NICS (prohibited) list.   You don’t need to do anything more than plan (“conspire”) to procure the gun.  The “exceptions” in subsection (d) of 18 U.S.C. 932, under the Leahy-Gillibrand-Kirk bill, merely repeat the “negligence” standard.

Any one who sells  two or more firearms to a “prohibited”  person or gives them a gift of a firearm or raffles a firearm in which a prohibited person wins, does so at the risk of spending 15 years in a federal penitentiary.

Chuck Schumer’s S374 aka “The Protect Responsible Gun Sellers Act of 2013” also sounds innocent enough until you realize it is nothing more than a gloried attempt to get gun owners names logged on a federal database.    Schumer’s  bill requires background checks through the National Instant Criminal Background Check System via a federally licensed firearms dealer for most transactions.  Exceptions are made for a transfer that  “shall include a sale, gift, loan, return from pawn or consignment, or other disposition.” Exempted are made for gifts within a family, such as by grandparents to grandchildren, and other very specifically defined circumstances in which somebody else is allowed to touch your firearm.   Pretty much anything else flirts with prison time.

The push for universal background checks on American gun owners is “a dishonest premise” that will lead to the creation of a list that will be abused by the government and the media.  What is appalling about this whole debate is how little it has to do with protecting the lives of our children and  how much it has to do with their Socialist agenda of gun confiscation.

Among President Barack Obama’s executive actions on gun control  was a pledge to address “unnecessary legal barriers” in health care privacy laws that he said may be preventing states from reporting people with mental illnesses to the  federal background check database.

Do you trust the government to decide who is or is not mentally ill?    Currently defined mental illness discussions have included  depression, eating disorders, personality disorders, and incompetence but no –  definitely not pedophilia.  Some states are considering legislation to make it easier for the government to have you involuntary committed since they can rescind your right to own a gun faster.  Other states, including Georgia and Mississippi, restrict gun rights not only to those involuntary committed, but also to those who have voluntarily committed themselves.

The National Rifle Association  obtained a Department of Justice memo calling for national gun registration and confiscation.   The nine page “cursory summary” on current gun control initiatives  has not been  officially released  by the Obama administration, and a  Justice Department spokesman said the memo was an unfinished review of gun violence research and did not represent official policy.  However, the DOJ memo arrived a few weeks prior to the Department of Veterans Affairs letters mailed  to some military veterans warning them that their competency to handle their own affairs had been called into question and if determined by government bureaucrats to be “incompetent,” they would be barred from possessing weapons.

Reid has promised to bring gun legislation to the Senate floor for debate in April.  If you are interested in keeping your guns, I’d suggest you contact your Senators asap.  Republicans beware!      Senator John McCain , my favorite RINO has been a key player in the quest to expand background checks and it looks like  Senators Susan Collins of ME and Dean Heller of NV are thinking about joining with Democrats.

Senator  Heller did say that he remains “open-minded” but shares concerns about private sellers being forced to maintain records. “Coburn and I share that concern only because you have to keep those records from 15 to 20 years and even proponents of the legislation say they would subject law-abiding citizens to stings by the ATF,” he said in reference to the Bureau of Alcohol, Tobacco, Firearms and Explosives

In a bit of good news,  an amendment by Senator James Inhofe, R-OK, to prevent the U.S. from entering into the U.N. Arms Trade Treaty passed the Senate on a 53-46 vote.   A Senate passed amendment is only a speed bump for Obama.  I’m sure he already  has his Socialist cronies  looking into a way around it.