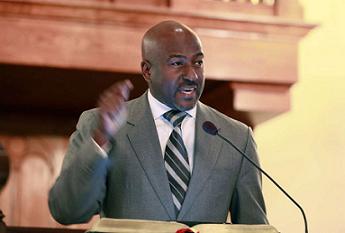 Rev. Kevin Johnson, senior pastor of Bright Hope Baptist Church in North Philadelphia, and alumni of the famed Morehouse College was uninvited to speak at his alma mater after criticizing Obama in an opinion column by none other than  Morehouse president John Silvanus Wilson Jr. who rescinded the invitation out of concern about the column.

Rev. Johnson’s sin – he dared write   ”A President for Everyone, Except Black People,” in the Philadelphia Tribune, in which he said that he supported Obama in 2008, not because he was black, but because he truly believed that he was the best candidate to empathize, understand, and develop policies to help the African-American community. . .  “To my disappointment, the president has not only failed the Black community, but also has failed to surround himself with qualified African-Americans who could develop policies to help the most disenfranchised.

The president’s agenda appears to be for everyone except Black people—his most loyal constituency.  Given the president’s poor record in catapulting an economic and empowerment agenda for the African-American community, we must begin asking the questions:

My questions do not suggest that we should necessarily change political affiliation, but they do suggest that the African-American community must hold political leaders accountable and change our strategy to ensure that we are fully engaged in the political process beyond November elections.”

Dr. Johnson was uninvited for the same reason Dr. Benjamin Carson was chastized for his conservative views.  Both broke the cardinal rule of being a black person in America – NEVER SPEAK IN OPPOSITION TO DEMOCRATS.

According to Wake Up Black America, most blacks are registered Democrats, and thus, it is expected that all blacks be Democrats and support progressives.  Break the rule and you’re attacked.  Blacks are not suppose to have the freedom of choice when it comes to ideology or party affiliation.   Attacks against blacks who do not toe the party agenda are rooted in “collective group think” mentality.  Those who aren’t part of the “collective” are opstracized for being an “individual.”