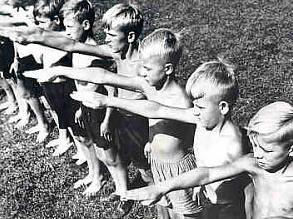 Like so many education reform initiatives that seem to arise from  nowhere,  Common Core  is another of these “sweeping phanton movements” that have gotten their impetus from a cadre of invisible human beings endowed with inordinate power to impose their ideas on everybody.  It is another such vampire calculated not only to suck the freedom out of the American people, but also to suck out the brains of their children.

Under Common Core a small group of union stooges,  over-paid educators and the Obama “elite”  from each state will get together and decide the newest version of No Child Left Behind. They will then impose it on the rest of us in the name of the federal government.  Everything taught will have to get the stamp of approval from the Socialist Common Core elite  who have already screwed up education in their own states.

When the government largely turns education over to union stooges and education technocrats that have produced such poor results for teachers, children and parents, it’s not to benefit our children, it is a benefit to the government and those who stand to make millions from it.

Diane Ravitchan, an educational historian, refutes claims by Obama and Common Core that the  standards were created by the states and voluntarily adopted by them. She writes  in The Washington Post, “They were developed by an organization called Achieve and the National Governors Association, both of which were generously funded by  the Gates Foundation. There was minimal public engagement in the development of  the Common Core. Their creation was neither grassroots nor did it emanate from  the states.” Instead, Common Core is being driven by policymakers in D.C.

It is not enough that they plan to dumb down our children.  Common Core amasses large amounts of personal information about students.  Research by Joy Pullmann of the Heartland  Institute, discovered a report by the Department of Education that revealed Common Core’s data mining includes “using cameras to judge facial expressions,  an electronic seat that judges posture, a pressure-sensitive computer mouse and  a biometric wrap on kids’ wrists.”

The DOE report also exposes the big lie that Common Core is about raising academic standards, revealing instead that Common Core’s main mission is to measure and track children’s “competencies” in “recognizing bias in sources,” “flexibility,” “cultural awareness and competence,” “appreciation for diversity,” “empathy,” “perspective taking, trust, [and] service orientation.”

Why is Obama and his merry band of socialist trying to re-inventing the wheel? Didn’t our public schools provide a decent education for the “greatest generation” when they were in school? That generation not only learned enough to win World War II but also enough to create the scientific foundation of our high-tech society. The only reason why we need  Common Core is because all of these graduate educationists need something to do to justify their degrees and the salaries that go with them. And of course the new curriculum will cost billions of dollars which will enable these vampires to live in the style to which they’ve become accustomed.

Common Core  adds nothing to what we know about how to teach reading, math, history, geography, social studies or science.  In short, it is a fraud to get the American taxpayer to shell out big bucks for something that we already know how to do.

Common Core is another Socialist based agenda that is taking America down the wrong road. Get involved.  This is something that we can win. Join the action,  sign up via  http://www.facebook.com/pages/Parent-LED-reform/18365477.

← Will American Soldiers Fire on U.S. Citizens?
What’s Wrong With This Woman? →