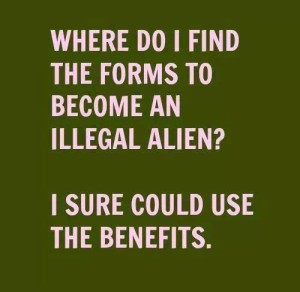 The Heritage Foundation  cost analysis of the “bipartisan” amnesty bill set  a price tag of $6.3 trillion in new spending and entitlements. Over their lifetime, Heritage says, “newly legal immigrants would receive $9.4  trillion in government benefits  – including Social  Security and Medicare, social programs like Medicaid and food stamps, and new  health coverage under Obamacare – while paying back $3.1 trillion in taxes.”

Of course the left, the media,  and unfortunately quite a few Rinos are up in arms, all calling the Heritage report a pack of lies.  Personally, I think Heritage underestimated the cost.  But it isn’t just the cost that is disconcerting.

A little-noticed section of the amnesty bill  could funnel up to $100 million in a taxpayer-provided slush fund to leftwing community organizers for helping to “integrate” newly legalized immigrants into American society.

The bill creates a new 501(c)(3) nonprofit corporation – the United States Citizenship Foundation (USCF) on pages 383-407, to disperse $100 million in Congressionally appropriated grant money to far left organizations that specialize in “outreach” to the immigrant community.  Since it will be a “nonprofit” corporation, USCF will be able to solicit donations from private individuals and other foundations.

Of the twelve people who will sit on USCF’s “Council of Directors,” only two will be public officials – the Director of U.S. Citizenship and Immigration Services, and the Chief of the Office of Citizenship and New Americans.  The other ten directors will be appointed by the two public officials above, and will be drawn “from national community-based organizations that promote and assist permanent residents with naturalization.”

Creating a non-profit corporation allows those overseeing USCF to move at least one step outside of direct congressional oversight. As a government-run private enterprise, it’s unclear how much access Congress can demand into its internal operations, such as funding and spending decisions.

Moreover, seeding the foundation with $100 million in grant money for its first five years loosens Congress’ hold on the purse strings, since the Gang’s bill, if passed, makes an immediate appropriation that will last until 2018.

The foundation’s ability to receive donations from private parties also opens the door to contributions from leftwing financiers like George Soros, who could use the tactic to conceal funding to ideologically aligned groups.  USCF funding goes to “qualified entities that… use matching funds from non-Federal sources, which may include in-kind contributions;” or “demonstrate collaboration with public and private entities to achieve the goals of …[integration].”

If the USCF provision becomes law, it will create a another cycle of potential and difficult-to-uncover corruption that allows leftwing activists and their financiers to siphon off taxpayer money while using the federal government as a tax and liability shield.

Sen. Chuck Grassley (R-IA) said the bill was just like Obamacare – which contained 1,600 delegations of Congressional authority. S. 744 gives the Department of Homeland Security too much power, allowing them to  waive rules over 400 times, including in cases where criminals attempt to get amnesty. Janet Napolitano would also be  authorizes  “to use up to $50,000,000” from the Comprehensive Immigration Reform Trust Fund to finance what amounts to a get-out-the-amnesty drive. The Trust Fund, which would be created by S.744, authorizes the transfer of $6.5 billion from “from the general fund of the Treasury.”

This bill also provides an engraved invitation for illegal aliens to sue the government for amnesty, individually or as part of a class action, and in many instances authorizes the Attorney General to appoint attorneys to represent illegal aliens at taxpayers’ expense.  The bill authorized illegal aliens to avail themselves of the federal court system, all the way up to the appellate court level if they are turned down for amnesty.

This bill would unleash a staggering wave of immigration to the  United States, unprecedented not only in American history, but in human history.  The consequences of this flood  of immigrants entering our labor force, utilizing our infrastructure, school  systems, welfare programs, and natural resources, are almost unimaginable.

The bill would grant legal status  to 12.8 million people. A decade after enactment, virtually all of these amnesty  beneficiaries would become green card holders, and an estimated additional  21 million immigrants would also receive green cards during the first decade of enactment.  These new arrivals would include about 12 million  people who would enter through existing family and employment-based systems,  through a newly created merit-based system (which gives points for having  relatives in the U.S.) plus the fast-track admission of about 4 million current  applicants who are waiting in line.

America now has about  22 million people who are unemployed or involuntarily working part-time. Yet, within six months of enactment, the backers of this bill would make millions of illegal aliens  eligible to compete for every job in our economy, and open the doors to more  than 20 million new arrivals over the next decade. This bill is a dagger  pointed at the heart of the American worker.

By what possible rationale could our representatives, and I use that term loosely, justify legislation that would add 34 million new permanent immigrants to our population in just one decade?

S.744 is not just a bill that rewards illegal aliens with amnesty. It’s way worse than that. It is a cynical attempt to dress up the giveaway of billions of taxpayer dollars to lobbyists and assorted other special interests as “immigration reform.” Even those Americans who might support amnesty as the least bad way of dealing with 12 million, or so, illegal aliens living in the U.S., would be appalled at the taxpayer-funded pork the bill serves up to lobbyists and advocacy groups.

The Gang of Eight bill is emblematic of what is wrong with Washington. It creates new opportunities for special interests to gorge themselves at the public trough, while doing nothing to rectify the fundamental flaw of current U.S. immigration policy – namely, the lack of any definable public interest objective. This bill has only one objective: to advance the political and economic objective of illegal aliens and the people who profit from them.

“There are seven things that will destroy us:  Wealth without work, Pleasure without Conscience, Knowledge without Character, Religion without Sacrifice, Politics without Principle, Science without Humanity and Business without Ethics.”  Mahatma Gandhi