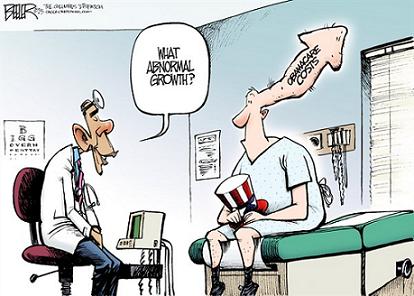 Affordability.  It was a central premise – and promise – of the Patient Protection and Affordable Care Act (ObamaCare)  when the law was debated in Congress throughout 2009 and signed into law on March 23, 2010. In his remarks that day, President Barack Obama stated: “This legislation will also lower costs for families and businesses . . . .”

Thanks to Obama, and Congress, who passed a bill they never read, America is about to receive a lethal dose of Socialism.

The House Committee on Energy and Commerce released a report on 2014 premium rate changes under ObamaCare, based on internal cost estimates from some of the nation’s largest insurance companies which include Aetna, Blue Cross Blue Shield and Kaiser Foundation.

The primary reason costs will increase is that ObamaCare  requires insurers to provide increased services and benefits while, limiting their ability to charge consumers based on age or health status. The minimum coverage requirements will increase premiums for those who had previously purchased less robust coverage, while “the infusion of less healthy individuals into the risk pool” will compound premium increases.

The end of gender rating may decrease premiums for younger women, but other populations including older women and men will see rates go up even with narrower age rating bands.

In addition to the new services, some of which people may not even want,  and benefits insurers are required to provide and the new rating and operation rules they are required to follow, ObamaCare  contains a number of taxes and fees that will be passed on to the consumer, not only in the private market but also in government programs run through insurance companies like Medicare and Medicaid.  Across the board, the taxes and fees will result in premium increases. In fact, one insurer provided a presentation titled, “ACA Tax Will Increase Premiums” that bluntly states: “[c]onsumers may no longer be able to afford their primary insurance choice.

The report concluded: “Despite promises that the law will lower costs, Obamacare will in fact cause the premiums of many Americans to spike substantially. The broken promises are numerous, and the empirical data reveal that many Americans, from recent college graduates to older adults, will not be able to afford the law’s higher costs.”