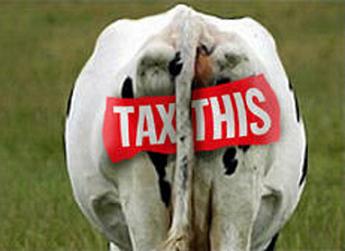 Judicial Watch is reporting that the Department of Agriculture is so concerned about our health that they are funding a $19.4 million study on the effect of  climate change on cows with the aim of  developing methods that will “increase the resiliency of dairy production systems while reducing greenhouse gas emissions” and “better understand vulnerability and resilience of Southern Great Plains beef in an environment of increased climate variability.” The academic teams will also develop an agricultural education endoctrination curriculum with an “urban foods focus.”

To justify the continued waste of taxpayer money, the government has produced numerous taxpayer funded reports exposing the ills of climate change.

There is no global warming – there is only the weather, a few rich elite who are getting even more wealthy by pushing a scare based on falsified science, quite a few “useful” idiots who believe them,  and the United Nations who won’t be content until they rule the world, with our money!