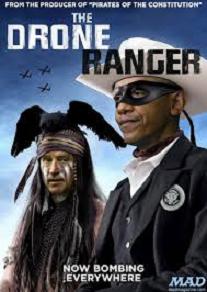 The president has already used drones to kill four Americans overseas, and  appears poised to extend their use to the homeland, with his administration  already having ordered the Federal Aviation Administration to expedite the process of integrating drones into civilian airspace.

We must ask ourselves how far the president’s commander-in-chief  authority extends.  Will his  current counterterrorism policy defend our liberties — or destroy them?

Instead of clearly defining the distinction between external threats versus citizens, Obama concluded the “threshold that we have set for taking lethal action applies to all ‘potential’ terrorist targets, regardless of whether or they are American citizens.”

If we adhere to our founding principles, we would use drones to fiercely defend  our nation from external threats while still protecting our own citizens from  their use at home.  We would spend less time restricting drone use against  foreign enemies, as the president did last week, and more time defining  safeguards owed Americans.

When our founding fathers set out the new presidency’s military power in  the Constitution, they used amazingly few words: “The President shall be  Commander-in-Chief of the Army and Navy.”   They were  not being cagey. On the contrary, they needed no further description because the  term “Commander-in-Chief” made perfect sense to the patriots of the Revolution — it meant the same powers that Commander-in-Chief George Washington had exercised to protect them. Accordingly, the  Supreme Court  often looks to this kind of history in determining the meaning of the  Constitution today.

Washington  was prepared to crush  foreign threats with the full might of the American arsenal. While he obviously  lacked modern technology, killing from afar is not a new phenomenon. Washington had sharpshooters and artillery with which he could eliminate enemy targets and  a network of spies with which he could target individuals. The fundamental issue  is not really about how we kill, but whom.

To Washington,  it was the commander-in-chief’s prerogative to take out foreign targets as he saw fit. He had no qualms about shelling the British in Boston or approving a plan to kidnap a son of King George III  because, to him, it was the  commander’s role to vigorously defend Americans from external threats.

These  precedents support the power of the president to employ drones vigorously  against foreign enemies, but when it comes to citizens, our founding principles  paint a very different picture.

During the Revolution, 15 to 20 percent of Americans supported the British. John Adams colorfully described these  Loyalists as “spiders, toads [and] snakes.”  At the same time, trampling the  rights of even such a “despicable animal” violated the Americans’ commitment to  republican principles.

The Loyalists who actively took up arms against their nation were shot on the battlefield.  Other Loyalists, however, were merely suspected of treasonous acts, speaking out against the Revolution, or even serious assassination plots.   This distinction between imminent violent threat and the less imminent law-breaker was crucial.  Washington gunned down the  former while protecting  the rights of the latter.

Perhaps the Loyalist lawbreakers also deserved death, but what was important to Washington was that it was up to the  courts to decide – not the  military.  Alexander Hamilton wrote of George Washington:  “His Excellency desires to  avoid nothing more, than  the least Encroachment  upon the rights of the  Citizens.”

Technology will continue to change, but our values and our precedents should  not. Washington  refused to adopt a policy of summarily executing Americans.  Based on his  understanding of the laws of war and his role as the American commander-in-chief, that would have been a violation of American values.

Targeting foreign terrorists is something our Founders would applaud, killing  U.S. citizens suspected of crimes is setting us on a slippery slope.  What are  the limits on our growing government’s power over Americans?

Beirne is an Olin Scholar at Yale Law School and the author of “Blood  of Tyrants: George Washington and the  Forging of the Presidency”

← The Amateur in the White House
NSA Secretly Collecting Phone Records Of All U.S. Verizon Calls →