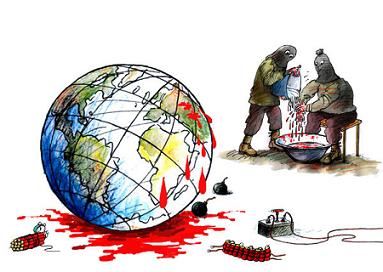 Is Hezbollah or al-Qaeda the A-Team of terrorism?  Perhaps, what is more important to ask – in the years ahead, does the U.S. have what it takes to be the A- Team of counterterrorism?

Last week, the State Department released the 2012 issue of its annual  Country Reports on Terrorism.  “At a ‘background briefing,’ a senior administration official highlighted an “alarming trend: a marked resurgence of terrorist activity by Iran and Hezbollah.  The tempo of operational activity was something we haven’t seen since the 1990s. . .We see no signs of this activity abating in 2013.  In fact, our assessment is that Hezbollah and Iran will both continue to maintain a heightened level of terrorist activity and operations in the near future.”

Hezbollah is financed and instructed by Iran.   Prior to 9/11/01, Hezbollah was responsible for more American deaths than any other terrorist organization.  Hezbollah’s secretary-general, Hassan Nasrallah says “Death to America was, is, and will stay our slogan.”

Hezbollah has been sending combatants into Syria in support of Bashar Assad, the dictator and Iranian satrap. Less publicized are Hezbollah’s operations in other corners of the world. A Hezbollah attack on a bus in Bulgaria last July killed five Israelis and one Bulgarian. In Nigeria, authorities recently broke up  a Hezbollah cell, seizing what one Nigerian official called “a large quantity of assorted weapons of different types and caliber.”

The State Department report contains surprisingly little information about Hezbollah in Latin America. However, a 500-page report issued last week by Argentine prosecutor Alberto Nisman reveals that Iran has established an archipelago of “clandestine intelligence stations and operative agents” in Latin America that are being used “to execute terrorist attacks when the Iranian regime decides so, both directly or through its proxy, the terrorist organization Hezbollah.”   Among the South American countries in which Iran or Hezbollah has set up intelligence/terrorism bases: Argentina, Brazil, Paraguay, Uruguay, Chile, Colombia, Guyana, Trinidad and Tobago, and Suriname.

Nisman provided additional evidence that Iranian officials and one Lebanese Hezbollah operative were responsible for two terrorist bombings in Argentina in the 1990s.  There’s an American nexus too: Nisman charges that Mohsen Rabbani, Iran’s former cultural attaché in Buenos Aires — implicated in the 1994 attack on a Jewish center in Buenos Aires in which 85 people were killed — directed “Iranian agent” Abdul Kadir, now serving a life sentence in connection with the 2010 plot to bomb John F. Kennedy International Airport in New York.

All this considered, can al-Qaeda still be considered a serious competitor?

In Afghanistan, al-Qaeda  maintains safe havens in the provinces of Kunar and Nuristan. Its loyal ally, the Taliban, is responsible for a level of violence “higher than before the Obama-ordered surge of American forces in 2010,” according to NATO’s International Security Assistance Force.

Al-Qaeda  and its affiliates have bases in northern Pakistan, which the Pakistani government notes  “continues to be a duplicitous ally, sponsoring and protecting various al Qaeda-allied groups. The Tehrik-e Taliban Pakistan (TTP), or Pakistani Taliban, remains a threat after orchestrating the failed May 2010 bombing in Times Square. The State Department announced in September 2010 that the TTP has “a ‘symbiotic relationship’ with al- Qaeda.”

The rebels that Obama is considering supplying weapons to,  the al-Qaeda affiliated al-Nusrah Front may be the most effective force fighting against Assad’s troops, and against Hezbollah and Iranian combatants in Syria.    Al-Qaeda is resurgent in neighboring Iraq, with April 2013 the deadliest month in that country in nearly five years according to the U.N.

They have  expanded operations in Yemen. In Somalia, Shabaab — which formally merged with al-Qaeda  last year — is far from defeated and has managed to carry out attacks in neighboring Kenya and Uganda as well. In Nigeria, Boko Haram continues to slaughter Christians.  In Egypt, al-Qaeda members and associates — including Mohammed al-Zawahiri, the brother of al-Qaeda leader Ayman al-Zawahiri — are operating more freely than ever. On 9/11/12 they hoisted an al-Qaeda flag above the U.S. embassy in Cairo.

Libyan groups closely linked to al-Qaeda were responsible for the 9/11/12 attack that killed Ambassador J. Christopher Stevens and three other Americans. Al-Qaeda in the Islamic Maghreb easily took over northern Mali until French forces pushed them out of the population centers. Al-Qaeda affiliates are becoming more visible and perhaps viable in Tunisia, too.

Despite all this, the State Department report asserts that “core” al-Qaeda “is on a path to defeat.” I am not convinced that there is sufficient evidence to substantiate that thesis. And even if it does prove to be accurate, who’s to say that a weakening core can’t be compensated for by a stronger periphery?

You can read Clifford D. May’s article, in full, at this link.

← These quotes should send a chill up your spine
Mosques: Off-Limits To Surveillance →