A Message To American “Law Enforcement” — “Losing the Mandate of Heaven.”

I’m proud to be here in the state of Texas but I’m going to talk on a serious subject and many of you are not going to like it. What I want to talk about is a consideration of why Temple, Texas, is important and why right now, right here, is the focus of a struggle on a much larger stage.

If you go to the dictionary and you look up delegitimize, you’ll see the definition is to “diminish or destroy the legitimacy, prestige, or authority of a system, as in ‘delegitimize a government.'”

The Chinese have a traditional philosophical concept called “the Mandate of Heaven,” which deals with the legitimacy of rulers. It is similar to the European concept of the divine right of kings, in that both seek to legitimize rule from divine approval; however, unlike the divine right of kings, the Mandate of Heaven is predicated on the conduct of the ruler in question. The Mandate of Heaven postulates that heaven will bless the authority of a just ruler and will be displeased by a despotic ruler and will withdraw its mandate, leading to the overthrow of that ruler. So believe the Chinese, even in the 21st Century.

John Locke said that political legitimacy derives from popular explicit and implicit consent: “The government is not legitimate unless it is carried on with the consent of the governed.” The is the basis of our Founders’ Republic. It is the essence of the Declaration of Independence.

If political legitimacy is a reservoir, the past twenty years of chronic two-party corrupt misgovernance and federally-assisted cront capitalism, interspersed with periodic bloody fits like Ruby Ridge and Waco; the sacking of the public treasury in the bailouts; the debasement of the currency and culminating with the ripping off of the smiling mask of lies in Fast and Furious, the IRS “enemies lists,” the Benghazi debacle and the attacks on the press presently under way, combine catastrophic drought with dam failure.

Governments at all levels in this country are now morally, ethically, economically and spiritually bankrupt. The once mighty reservoir is now a tiny, tiny rivulet of wishful thinking.

What does all of this have to do with Temple, Texas?

I came all the way out here from Alabama because what happened here is merely the latest example of the delegitimization of government, and especially law enforcement, in a long line of such sorry episodes. I came here to deliver a warning to all law enforcement officers that they are unthinkingly delegitimizing themselves by identifying themselves as apart from the people and the Constitution that they swore to protect.

For twenty years and more now we watched “peace officers” turned into paramilitary gangs of armed thugs, responsive only to the politicians who sign their paychecks.

For twenty years and more we have watched the federalization of our local police and sheriffs departments. This process was accelerated under George Bush’s so-called “war on terror,” with the universal fielding of Joint Task Forces and “fusion centers.” Yet today we see this unconstitutional vertical integration of law enforcement considers you — the armed citizenry — as greater enemies to themselves and the rotten system they seek to protect than the jihadis sent by the late and unlamented Usama bin Laden.

This country faces many threats and challenges and the police like to tell us that they are the “thin blue line” protecting us from the evil bad guys. But if you read police magazines these days, you will find much about police tactical teams adopting a “warrior ethos.” Well, that begs the question — with whom are they at war? Law-abiding citizens exercising their natural, God-given and inalienable rights, no matter how “rudely”?

Now let me show you who some members of law enforcement think is the enemy — who they train daily to engage until, like all training, it becomes unthinking and automatic. 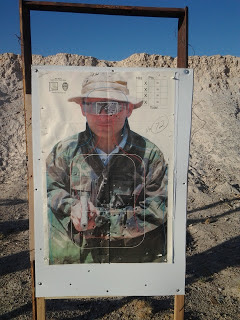 This is a target used by the New Mexico Department of Public Safety. Look familiar? It ought to. This fellow looks like all of you out there. And the New Mexico people are not the only ones who use targets like this.

This is who so-called “law enforcement” now considers to be the enemy.

Not even Usama Bin Laden, for that would be politically incorrect.

Their enemy, my friends, is YOU. It is US. It is the armed citizenry of the United States.

So I say to these members of law enforcement, all of whom took an oath to preserve, protect and defend the Constitution of the United States —

What makes you think that the orders of corrupt politicians trump that oath?

What makes you think that our rights are hostage to the anti-firearm neuroses of our neighbors?

What part of “Shall Not Be Infringed” don’t you understand?

And given that, given that you now seem to regard US as the enemy of all police, why then should we not regard YOU as illegitimate?

Why then should we regard you — if we are your enemy — why should we not consider you OUR enemy?

How, then, will you react, Mr. Policeman, when you begin to see targets like this with uniformed police officers on them? Can you give us a good reason why we shouldn’t return the favor?

This is unpleasant stuff. This is dangerous stuff. BUT THIS IS WHAT HAPPENS WHEN A REGIME DELEGITIMIZES ITSELF!

This is what happens when a regime throws away the Mandate of Heaven.

And if the law enforcement officers who have forgotten their oaths think that all they have to do is obey their unconstitutional bosses’ orders in order to draw their pensions, future history will dictate otherwise.

THAT is why Temple is so important.