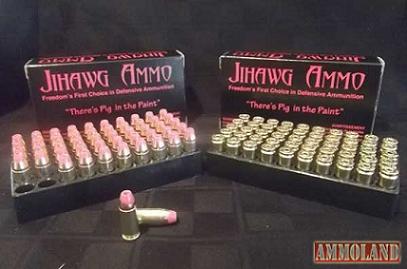 How do you deal with religious extremists who believe that dying for their faith  is an Express Ticket to Paradise?

Muslim jihadist believe that killing an “infidel”, an “enemy of Islam” will win them a reward of 72 virgins in Paradise.  Whether or not this is a fact may be open to debate but there are many Islamist Imams who use this promise to encourage young men to engage in jihad, to die a martyr.

Is there a way to stop this nonsense?  A company in northern Idaho has come up with a culturally sensitive solution.  Jihawg Ammo has developed a proprietary system for infusing ballistic paint with pork. The special pork-infused  paint is then applied to the bullets of loaded ammunition. The inclusion of pork  in the paint makes the bullets haraam, or ‘unclean.’ and under  Islamic law, anyone who  comes in contact with any haraam item is then unclean, and must engage in a  cleansing ritual.  No unclean person can be admitted into Paradise. Do not pass Go. Do not collect 72 virgins.

The objective of Jihawg Ammo is not to insult Muslims, nor even to send a  terrorist to Hell. The objective is to be a deterrent – to place the promise of instance passage into Paradise and its 72 virgins into doubt in the minds of would-be jihadists. Without the promise of Paradise, how many Muslim literalists would be  willing to lay their lives – and eternal souls – on the line in order  to engage in acts of terrorism?

Jihawg Ammo’s company slogan is “Peace through Pork.” They sell  their specially treated ammunition for defensive purposes only. There are those in Muslim circles and on the left who will choose to take offense by the entire concept of Jihawg’s haraam ammo but the makers of Jihawg counter that threatening a murderer with eternal damnation  is not a new concept.

Killing them seems to just give them what they think they want.  Only wounding them leaves them wards of taxpayers where they can serve out their sentences as living martyrs at taxpayer-funded prisons, aka, Islamist study centers.

Jihawg Ammunition creates a natural deterrent that forces Jihadist to choose  peace or face certain death and damnation–no other ammunition in the world can  make this claim.