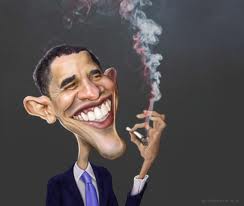 Obama’s honeymoon with the world is over.  The marriage is becoming deeply troubled and, increasingly, loveless.

It says a lot when the Tea Party Patriots can draw a larger crowd to their Audit the feds Rally in D.C., with an estimated crowd of   10,000 and 15,000 supporters, while across the ocean Obama could only draw around 4,500 to hear his speech at the Brandenburg Gate in Germany.

The last time Obama paid a visit to Europe, as a candidate in 2008, he was cheered on by  200,000 Germans eager to see him and the end of the  George W. Bush era and, as one member of that crowd recalled  “full of wholly unrealistic expectations of what kind of miracles Obama could work.”

This time around, the  reception was far more restrained.   According to the National Journal  “he didn’t come away with much, winning just a smattering of applause. . .”

In stark contrast to that of his presidential predecessors, Barack Obama’s message on Wednesday was pure mush, another clichéd “citizens of the world” polemic with little substance. This was a speech big on platitudes and hopeless idealism, while containing much that was counter-productive for the world’s superpower. Ultimately it was little more than a laundry list of Obama’s favourite liberal pet causes, including cutting nuclear weapons, warning about climate change, putting an end to all wars, shutting Guantanamo, ending global poverty, and backing the European Project. It was a combination of staggering naiveté, the appeasement of America’s enemies and strategic adversaries, and the championing of more big government solutions.

The Telegraph reports that completely missing from Obama’s address was a call for the West to stand up to the rising threat of Islamist militancy, the defence of Christians facing huge levels of persecution and intimidation in the Middle East, strong condemnation of Iran and North Korea’s nuclear ambitions, and any criticism of growing authoritarianism in Russia. The president paid lip service to the NATO alliance, which has proved critical in preserving Europe’s security for over 60 years, but made no call for the alliance to be strengthened in the wake of waning support and investment in Europe.  Obama’s distinctly unimpressive speech in Berlin was another dud from a floundering president whose leadership abroad is just as weak as it is at home.

What was it, exactly, about Obama’s controversy-marred trip to Germany and the G8 Summit in Northern Ireland that fell so flat? Ummm, how about … everything?

Vladimir Putin, doesn’t agree with Obama’s views about Syria.  There was the coded warning from Chancellor Angela Merkel of Germany about spying on friends, and her and Obama’s continuing frostiness over the issue of economic stimulus versus austerity.  It probably didn’t help matters that Obama spent 40 minutes speaking to her rival for the Chancellery, Peer Steinbrück of the center-left Social Democrats, a party roughly equivalent to the US president’s Democrats.

Officials all over Europe are demanding immediate answers about NSA spying  and have denounced the practice of secretly gathering digital information on Europeans as unacceptable, illegal and a serious violation of basic rights.  Peter Schaar, Germany’s federal data protection commissioner told the Guardian that it was unacceptable that US authorities have access to the data of European citizens “and the level of protection is lower than what is guaranteed for US citizens.” His Italian counterpart, Antonello Soro, said that the data dragnet “would not be legal in Italy” and would be “contrary to the principles of our legislation and would represent a very serious violation”.

Europe has figured out that a clear legal framework for the protection of personal data is not a luxury or constraint but a fundamental right.   Europe has also figured out that Obama is not what he portrayed himself to be.   It’s too bad that a lot of Americans have yet to reach the same conclusion.

← FDS HUB: A Portal To Your Medical and Financial Records
Obama’s Leadership →