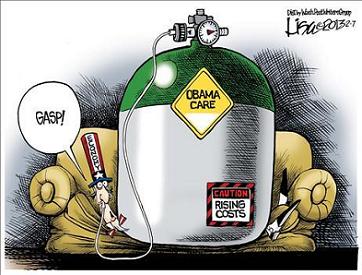 It isn’t just those “greedy” capitalists that are trying to skirt Obamacare’s abusive mandates.  Local governments across the country have been quietly doing exactly the  same thing.   The result is that part-time government workers, many of them low-income, now face pay cuts that can top $3,000 a year, and  will still be left without  employer-provided benefits.

Here is just a small sampling of local news reports about what local  government officials are saying about ObamaCare, and the steps they’re taking to  avoid or minimize its costs.

Virginia: Paul Logan, a spokesman for Governor McDonnell said that “The Commonwealth of Virginia is grappling with the same issues that  many businesses in the private sector are as they struggle to deal with the  costs imposed by the Affordable Care Act.” . The state  is requiring that about 7,000 part-time government workers put in no more than  29 hours a week.

Phillipsburg, Kan.: “School administrators here say they are alarmed and  confounded by the looming new costs they face with the implementation of the  Affordable Care Act,” according to the Kaiser Health Institute News Service. Chris Hipp, director of a Kansas special education cooperative, warned that ObamaCare’s costs “could  put us all out of business or change significantly how we do business,” adding  that “we are not built to pay full health benefits for noncertified folks who  work a little more than 1,000 hours a year.”

Dearborn, Mich.:  Mayor John O’Reilly explained that “If we had to provide health care and other benefits to all  of our employees, the burden on the city would be tremendous,”  The city is cutting its more than 700 part-time and seasonal workers down to 28 hours a week. “The city  is like any private or public employer having to adjust to changes in the  law.”

Dennis Costerison, executive director of the Indiana Association of School Business Officials says that  “What I’m seeing across the state is school districts, unfortunately,  having to reduce the hours that they are having some of their folks work,  primarily so they don’t have to worry about the (ObamaCare) penalties, or they  don’t have to provide them health insurance, which would be very, very costly,”   Ft. Wayne Community Schools, for  example, are cutting hours for nearly three-quarters of its part-time aides.

Omaha, Neb.: “The biggest problem is everyone said that ObamaCare is only  going to help cut costs. Nothing could be further from the truth,” said Mike Kennedy,  who serves on the board of Millard Public  Schools, just outside the city, and figures ObamaCare will raise its costs by  $400,000. A neighboring school district is reducing hours for up to 281  part-time employees to avoid $2.5 million in new costs, which will result in pay  cuts of up to $3,300.

Long Beach, Calif.: “We are in the same boat as many employers,”  according to Tom Modica,  Long Beach’s director of government affairs. “We  need to maintain the programs and service levels we have now.” So the city is  going to cut hours for 200 part-time workers so it doesn’t have to pay $2  million to provide health benefits.

Salt Lake City, Utah: “With new provisions in the Affordable Care Act, there was  going to be a significant burden upon Granite School District and our taxpayers  to offset the cost of benefits,” said spokesman Ben Horsley  He says covering the district’s part-time  workers would cost about $14 million, and so about 1,000 will have their hours  cut to 29 a week.

Cape May County, N.J.: “A number of people in the nation who read it are  recognizing how detrimental (ObamaCare is) to government and private employers  out there,”  according to Gerald Thornton,  the county’s finance director who is trying  to figure out how to budget for the law.

Texas: “The Affordable Care Act has added so much complexity and administrative  burden that there is nothing affordable about it,” said Jared Pope,  who is consulting with Texas municipal  governments on ObamaCare. Dallas expects its health costs to climb $2.1 million  next year. Plano is cutting hours to avoid $1 million in new costs.

Kern County, Calif.: “It will affect multiple departments, a majority of  departments,” said the county’s deputy administrative officer Eric Nisbett.  Unless the  county cut worker  hours for 800 employees, ObamaCare would cost it up to $8 million a year.

Allegheny County, Pa.: “There’s frustration and anger and sadness and  resentment, you know, but you don’t have a voice,” said adjunct English  professor Clint Benjamin in the wake of the Community College of  Allegheny County’s decision to cut hours for about 400 adjunct faculty and other  employees so it wouldn’t have to pay $6 million in ObamaCare-related fees next  year.

Medina, Ohio:  Mayor Dennis Hanwell said that “We feel bad as a city administration and as a council in  having to cut hours from 35 to 29.  We have the budget to pay the people,  but we do not have the budget to pay for the health care.” If they hadn’t made  that cut, the city faced up to $1 million in new health costs courtesy of  ObamaCare.

Birmingham, Mich. Commissioner Gordon Rinschler  may have summed up best the reaction that  countless businesses and governments are having to ObamaCare, saying: “We simply  can’t afford the Affordable Care Act.”

← Toy Gun March in Washington, D.C. Scheduled for July 3rd
You Reap What You Sow →