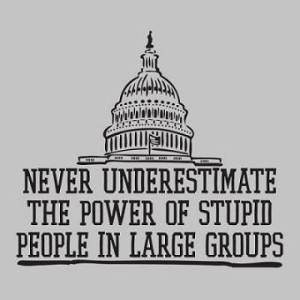 Even though Americans have access to more information today than at any other time in history, it seems that the U.S. population just keeps getting dumber.  At what point do we become so dumbed-down that we can no longer function as a nation?

The people we elect to office are a direct reflection of who we are as a people.  Sadly, today the founding fathers wouldn’t stand a prayer of being elected.

The following surveys prove  that a large chunk of the U.S. population are totally clueless.

– Having never heard of the 4th Amendment, 55% of Americans believe it is okay for government to track our phones in order to “keep us safe.”

– 67% of Americans support the use of unmanned drones in the U.S.  What next?  Security robots that stand in the corner and watch what we eat?

– Almost one-third of Americans would be willing to submit to a TSA “body cavity search” in order to fly.

– 20% of all government workers and 26% of Obama supporters consider the Tea Party to be the “biggest terror threat” that America is facing.

– 89.7% of Americans believe that they are eating a healthy diet, even though about 36% of all Americans are obese.

– 29% of Americans believe that “cloud computing” involves an actual “cloud.”

– 42% of all Americans are unaware that ObamaCare is even  law.

– Only 37% of all Americans between the age of 18 and 24 can find the nation of Iraq on a map. Probably less than that could find America on a map!

– Almost 25% of all Americans don’t know that the U.S. declared independence from Great Britain.

– 24% of all U.S. teens that have already experienced a sexually-transmitted disease still have unprotected sex.

– 48% of all Americans do not have any emergency supplies stored at home.

– 51% of all Americans agree with the statement: “it is necessary to give up some civil liberties in order to make the country safe from terrorism.”

– Only 16% of all Americans believe the Federal Reserve should be abolished.

– 29% of all Americans can not recall the name of our vice-president.

As a nation, we no longer seem to care about the Constitutioin.  When our politicans tell us that they want to ignore large sections of it, we just shrug and go along with it.

As a society, we have completely abandoned the values and principles that founded this nation.  We like to think we have “progressed” far beyond the need.   The truth is – our country is coming apart at the seams.