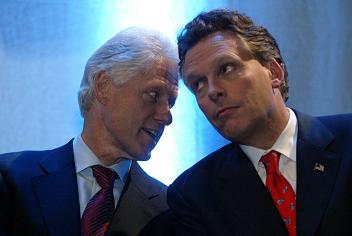 Virginia gubernatorial candidate  Terry McAuliffe was one of dozens of investors with a Rhode Island estate planner , charged with defrauding insurers by using the stolen identities of terminally ill people.

McAuliffe and other investors  became owners of the investment instruments through Cranston estate planner Joseph Caramadre.  Caramadre pleaded guilty to stealing the identities of terminally ill patients and using that information to falsely apply for annuities and bonds with death puts.

Prosecutors said Caramadre cost insurance companies between $37 million and $48 million from the scheme.  He and his employee Radhakrishnan forged signatures of patients or lied to them about why their signatures were needed so they could purchase “death put” bonds in the victims’ name.  A “death put” allows the beneficiary of a deceased person’s estate to sell the bond back to the issuer if the beneficiary dies or becomes legally incapacitated.   In some cases, th victims were told signatures were required to document Caramadre’s charitable gift.  Others were promised an account would be opened to benefit the survivors of the terminally ill person or other families grappling with terminal illnesses.

Prosecutors alleged that  Caramadre and others (investors) turned a profit by exercising the death benefits. More than 200 variable annuities and more than 75 brokerage accounts were purchased this way. .

Besides McAuliffe, Robert Flanders, a former justice of the Rhode Island Supreme Court, is on the investment list.  Gaythorne “Poochie” Angell, a long-time bookie and mob associate, was also an investor, along with Monsignor Raymond Bastia, who handles financial planning for the Roman Catholic Diocese of Providence.

ProPublica reports that Caramadre has spent a lifetime scouring the fine print.  He’s hardwired to seek the angle, an overlooked clause in a contract that allows him to transform a company’s carelessness into a personal windfall. He calls these insights his “creations,” and he numbers them. There have been about 19 in his lifetime.  For example, there was number four, which involved an office superstore coupon he parlayed into enough nearly free office furniture to fill a three-car garage. Number three consisted of a sure-fire but short-lived system for winning money at the local dog track.  But the one that landed him on the evening news as a suspect in a criminal conspiracy was number 18, which promised investors a unique arrangement: You can keep your winnings and have someone else cover your losses.

It is important to note that Federal court documents do not accuse McAuliffe, or other investors of  wrongdoing, and at this time, it isn’t even  clear whether McAuliffe made money on his investments.  His campaign spokesman claims that McAuliffe was a “passive investor” who was deceived like many others.

This just reminds me of something my dad always preached at me – “you are known by the people you hang around with.”

← The BIG LIE
Clinton Insider Admits He Murdered for the Clintons →