The Egyptian people wanted a true democracy without an Islamic government, sharia law and the Obama backed Muslim Brotherhood.  How dare they!  How dare they not support Muslim terrorists and the mass murderers of Christians in Syria and Egypt.  How dare they oust Obama’s desired dictator.

Disobey the “master” and expect to be punished.

Obama has suspended hundred’s of millions in aid to punish the people of Egypt from throwing off the yoke of Islamic tyranny.  He is  “holding” a dozen F-16’s and Apache helicopters, 4 M-l/A-l tanks, and an unspecified number of  Harpoon missiles along with $260 million in cash, plus he is not following through on a $300 loan guarantee slated as part of our foreign military financing. 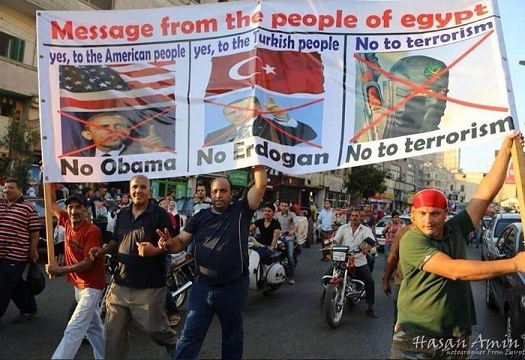 “Egypt will not surrender to American pressure and is continuing its path toward democracy.”

U.S. aid to Egypt is not a gift or a donation, nor is it voluntary.  It is part of the peace agreement between Egypt and Israel, signed in 1979, that  stipulates that America gives must give  Egypt similar aid given to Israel, whether financially or militarily, thus maintaining  the military balance between the two countries, ensuring the continued commitment to that treaty. Obama is now in breach of those essential terms giving Egypt the right to retreat from the Convention, which could raise a lot of anger in Israel for Obama’s position, which stands against the interests of Israel and does not benefit the interests of either Egypt or America itself.

← “Throw Them all out!”
Obama closing peoples farms →