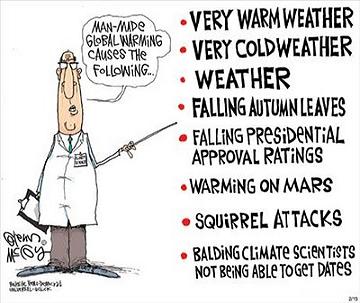 Never allowing evidence to interfere with the narrative, the U.N. Intergovernmental Panel on Climate Change (IPCC) published a summary of its fifth report on what they call “the greatest challenge of our times.”

“Warming of the climate system is unequivocal,” they insist, followed by another lie that “each of the last three decades has been successively warmer at the earth’s surface than any preceding decade since 1850,” followed still by shrinking ice sheets, rapidly rising sea levels and the usual touted liberal scare tactics.

Answering the reason why there has been no warming since 1998, the IPCC buried their explanation on page 10.   “The observed reduction in surface warming trend from 1998-2012, when compared to 1951-2012, is roughly equal to a reduced trend in radiative forcing and a cooling contribution from internal variability, which includes a possible redistribution of heat within the ocean. . .there may also be a contribution from forcing inadequacies and, in some models, an overestimate of the response to increasing greenhouse gases and other anthropogenic forcing.”  And you thought only politicians could talk forever without saying anything.

In English –  the UN scientists are admitting that temperatures have been flat for 15 years but no one can explain why and they don’t want to spend any time on finding an explanation because  it is politically inconvenient and would prove that all those climate-change model predictions are useless.

They also admitted that big Al is a liar (not exactly in those terms).  According to the IPCC, there  is little evidence to suggest that droughts and hurricanes are caused by man “but” (there is always that “but” to cover their butts) it could happen in the future.

Expect the usual sky-is-falling crowd at the White House to gloss over page 10 if anyone of the lap-dog media grows a set and brings the subject up.  Expect the socialists to continue the war on coal, stalling the keystone pipeline,  banning natural gas drilling, while pushing expensive solar, useless wind power and the EPA to destroy America’s economy.

In a recent article, two leading skeptics, Patrick J. Michaels and Paul C. “Chip” Knappenberger described the IPCC’s AR5 as a “Humpty Dumpty-esque report once claiming to represent the ‘consensus of scientists’ (that) has fallen from its exalted wall and cracked to pieces under the burdensome weight of its own cumbersome and self-serving processes, which is why all the government’s scientists and all the government’s men cannot put the IPCC report together again.”

Patrick Michaels of the Cato Institute described it as a “political suicide pill” because any politician who tries to legislate climate policy based on this new report will be putting their career in serious jeopardy.

“For the layman who has little or no knowledge of climate science or meteorology, it is sufficient to know that none of the claims put forth about global warming have come true. None of the claims being made again will come true. Indeed, given the cycles of ice ages, the present cooling could turn into a new one.”  Alan Caruba