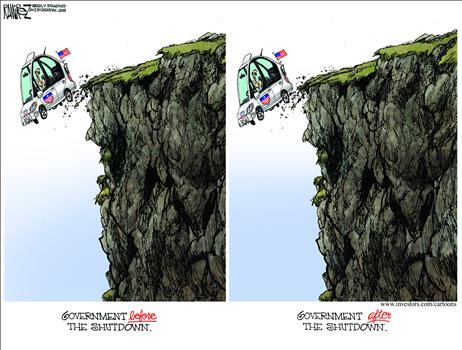 Here’s a little secret about the bill Congress has approved ending the partial government shutdown and preventing a possible federal default:   it is stuffed full of goodies, paybacks and projects.  Surprised?

There’s $2.9 billion  to  upgrade a lock in the Ohio River between Illinois and Kentucky;  both states represented by the Senate’s most powerful members – Mitch McConnell and richard Durbin, but according to Reid it’s not a payback for McConnell’s help drafting the measure.

There is a provision to increase federal monies up to $450 million to help  Colorado rebuild roads washed away by last month’s catastrophic floods.

There is an extra $294 million to help  the Veterans Affairs Department whittle down a backlog of disabilities claims which politicians hope will help veterans forget Obama’s abuses during the government shutdown.

There is another $100 million to prevent furloughs of air-traffic controllers and safety inspectors.

There is additional money thrown at the National Oceanic and Atmospheric Administration to continue their work on two weather satellites.

There is additional money for the Department of Defense to assist African troops in their pursuit of a rebel group.

There is extra money for contracts with private companies whose ships move American troops and their equipment overseas.

Also included is $174,000 payable to the widow of the late multimillionaire, New Jersey’s Senator Frank Lautenberg.

The measure, approved Wednesday by the House and Senate, does have one lump of coal for lawmakers in an apparent appeasement to voters –   For the sixth consecutive year it would deny them the annual cost-of-living pay raise that by law they automatically receive unless they vote to block it. Members of Congress earn $174,000 annually, and some leaders receive more.   If they really wanted to appease voters – they would have cut their salaries in half.

Note that neither the House or Senate saw fit to end the unconstitutional Obama decree allowing them to receive subsidies for their gold plated heath policies.

Obama couldn’t wait to smirk proclaiming that now, since  he knows for a fact that RINO Boehner will cave to anything, we’re going to give amnesty to illegals,  pass a massive socialist economic ball-buster budget and pass the long stalled pork laden farm bill.

After weeks of an Obama directed government shut down, out-of-control spending continues, the debt limit is raised without addressing unsustainable spending, with only vague promises to address the problem in the future.

The real losers –  our children and grandchildren who have lost all hope of ever attaining the American dream.

← Are YOU Paying Attention? Are YOU Listening?
Government Program To Control Religious Thought? →